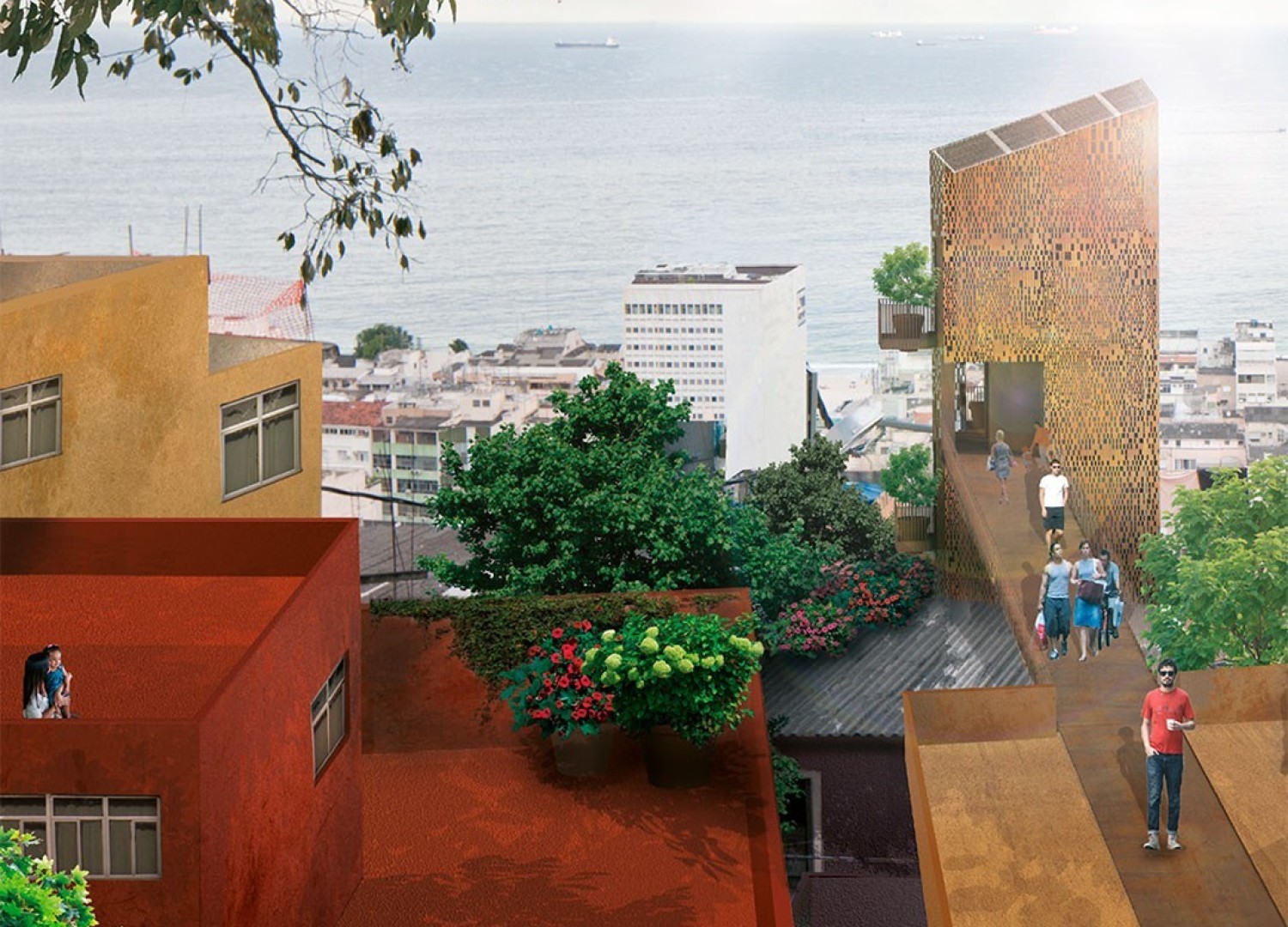 Living the Community is a research ordered by Forum das Américas and developed by Archea Brasil together with a team of professors teaching at Italian and Brazilian universities, assisted by specialized consultants for aspects related to architecture, systems and technologies. The project, which was presented in the Italian Pavilion on the occasion of the Rio+20 conference on sustainable development organized by the United Nations, held in Rio de Janeiro from 13 to 22 June 2012, suggests new intervention strategies that may serve to upgrade the spontaneous urban systems of Rio de Janeiro. The city, which is currently undergoing a process of transformation and renewal associated with the important international events scheduled for the next few years, from the Soccer World Cup of 2014 to the Olympic Games of 2016, feels the need for an eco-compatible transformation of much of its informal building heritage.
The research has focused on the favelas of Babilonia and Chapéu Mangueira, located behind the Bairro do Leme, which have already been involved in the Morar Carioca project, launched by the Prefecture of Rio de Janeiro. This proposal, requested by the Italian Ministry for the Environment and Protection of the Territory and the Sea, represents an integration of that project.
Favelas, or rather comunidade, conurbations which have formed spontaneously to meet the pressing need for housing for the urban sub-proletariat since the late Nineteenth century, represent a reality of physical and social degradation that is no longer compatible with the city’s new political ambitions and strategies of global assertion. The complete separation and segregation of these areas from the rest of the metropolis, and especially from the legal residential areas defined as the formal city, in addition to the lack of services and infrastructures, the insalubrious conditions, the criminality and the more or less total lack of building permits resulting in statically and functionally precarious buildings, call for urgent interventions that must nevertheless be well-pondered, as it would be impossible to demolish such a vast quantity of built tissue.
The suggested planning strategy is inspired by a reading of the primary actions of a difficult day-to-day existence: to enter, get around, live, relate to others and to live sustainably. The project, aided by an important preparatory phase of analyses of the existing reality, aims to propose new operational solutions ranging from the architectural and urban scale to technological and sustainability-oriented choices intended for the moradores of the area, in order to bridge the gap between formal and informal city. More and more comfortable points of access through the creation of pedestrian routes, escalators, elevator towers and public transport services, in addition to a more developed mobile telephone network and widespread web accesses, will make it possible to achieve an urban and social desegregation that is desired and sought for by everyone in Rio.
The purpose is to obtain a direct involvement of the inhabitants of the comunidade by offering them simple and practical models that they may use to improve their homes, adopt sustainable lifestyles, and upgrade the public spaces surrounding them. The central issue of the proposal, which at least in the early stages has absolute priority, consists of making it easier to enter the comunidade, making them accessible and enabling even the older inhabitants to get around on the hillsides, walk on and between the terraces and move comfortably within the area, introducing new commercial and cultural activities, building sewage and water grids, in addition to infrastructures as cisterns for the collection of water, garbage sorting, etc.
The principal instruments of diffusion and Editoria of the research are represented by a publication published by Forma Edizioni titled Habitar a comunidade, translated in Italian and Portuguese, a photographic reportage with more than 200 images created by the Brazilian Leonardo Finotti, a video featuring a number of interviews, shorts and an animation by the Italian filmmaker Giacomo Pellegrini, presented within the context of the Rio+20 event, at the Italian Pavilion which has hosted a cycle of meetings and conferences on the subject of the urban regeneration of the favelas during the days of the summit. 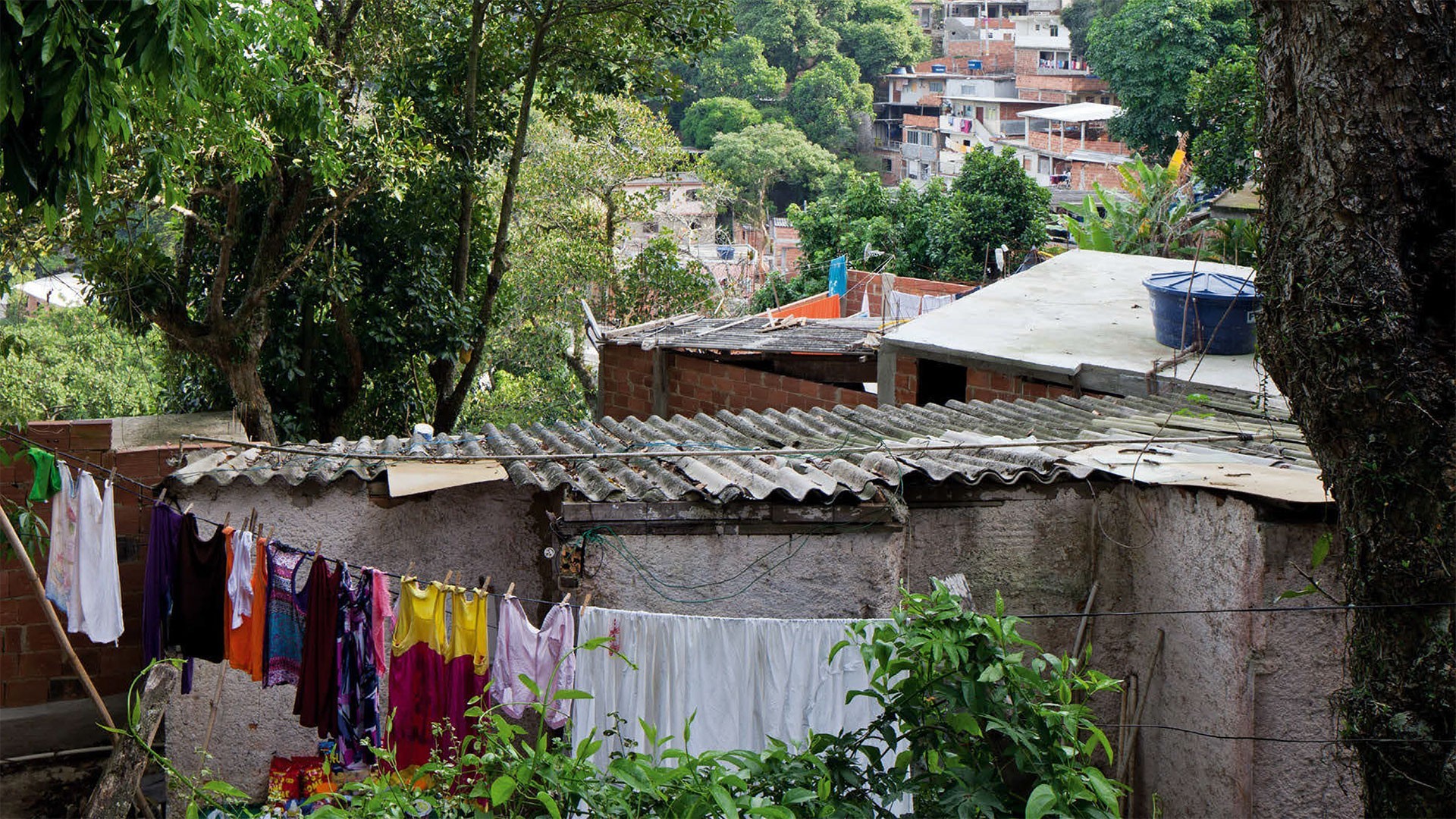