The railway area of Firenze Porta al Prato is delimited on one side by the former Leopolda Station (location of cultural events) and by the underground station currently under way and on the other, by the Parco delle Cascine. The vicinity of the current Municipal Theatre (500 m), the hinge between the historical centre and territorial road network, and the Park’s leisure activities, determine the both cultural and playful vocation which the competition proposes to improve with the construction of the new head offices of the Florentine Maggio Musicale. The project is to include: a lyrical theatre to seat 2,000 people, an auditorium with 1,000 seats, including an open-air cavea, technical stage-set workshops, commercial activities with relative services and public spaces. The project tackles the significance of the architectural object not just in terms of structure and function, but also in terms of art and city life: the works of the master Giuliano Vangi show how architecture and sculpture are perceived as elements of a single space, as in an ancient, Renaissance town; and the architectural symbols of perception and qualification derive from the study of how the area is visually approached. The required functions are articulated in a fluid, sculptural form, which identifies each urban rapport in a plastic continuum of projections, indentations and variations in level: it is not structured through hierarchical views, but through focal points and cross axes, presenting itself with conformations and perspective links, and a variety of functions.
The line of approach, along which the access to the underground car park and pedestrian underpass are located, coincides with the access way to the historical centre and with the road network, including that of public transport. It becomes a both functional and formal axis: shops, eateries and leisure centres lure the visitor along the architectural promenade towards the foyer and music spaces. The latter consist of two cantilevered foreparts, which cover respectively the terraces of the open-air cavea  projection of the concert hall  and part of the square beneath the auditorium. The elements develop in a crescendo, which culminates in the 40 m-high scene tower. The façade of building, articulated in such a way, overlooking 300 m of public urban space, contains a much sought-after perceptive value within. The stone blocks, enhanced by the whitish-green enamelled terracotta cladding, a historic memory of the Florentine Romanesque period and of the Tuscan ceramics tradition, are opened up with glazed surfaces, through which the building gradually reveals its internal articulations. 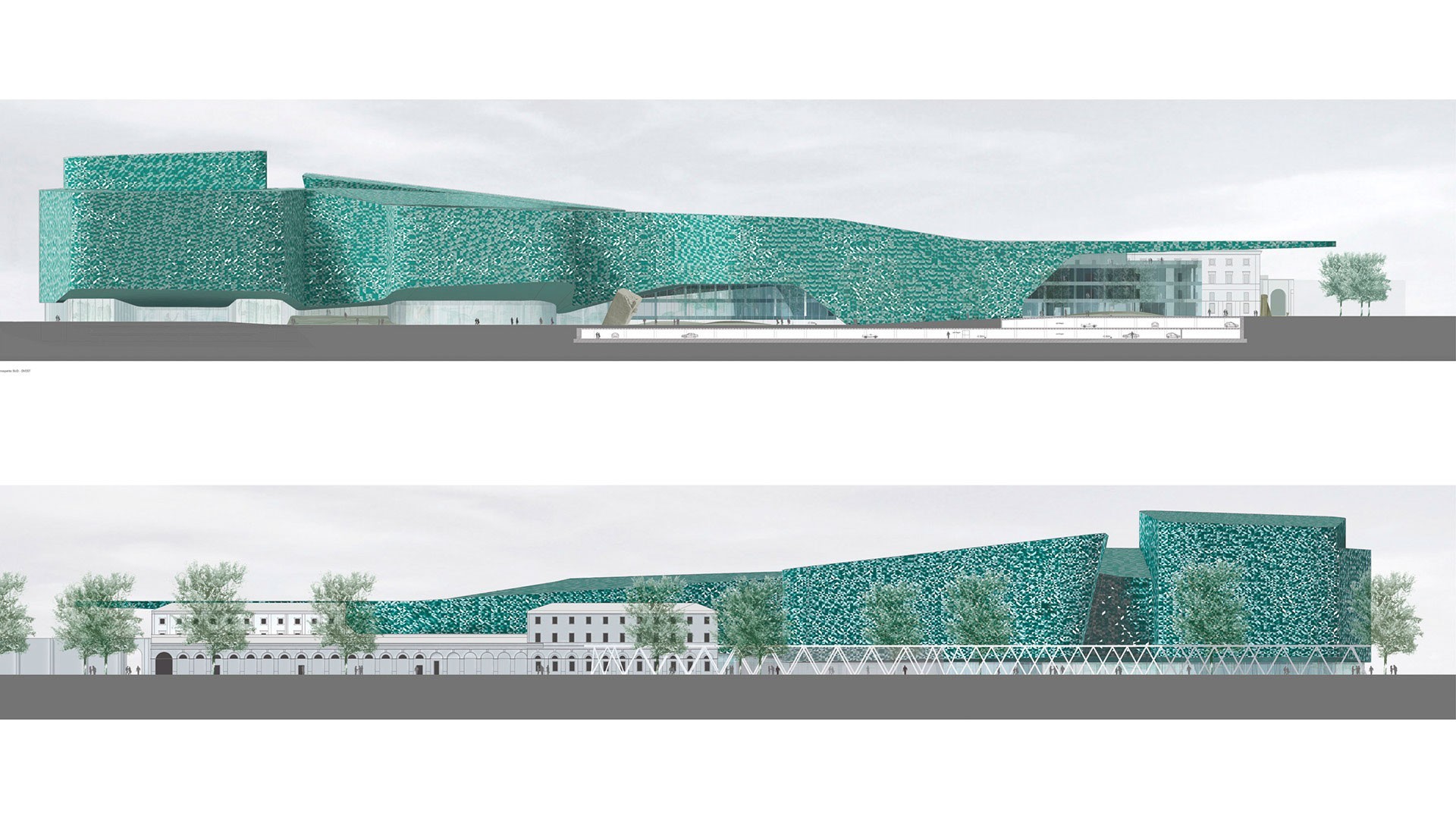 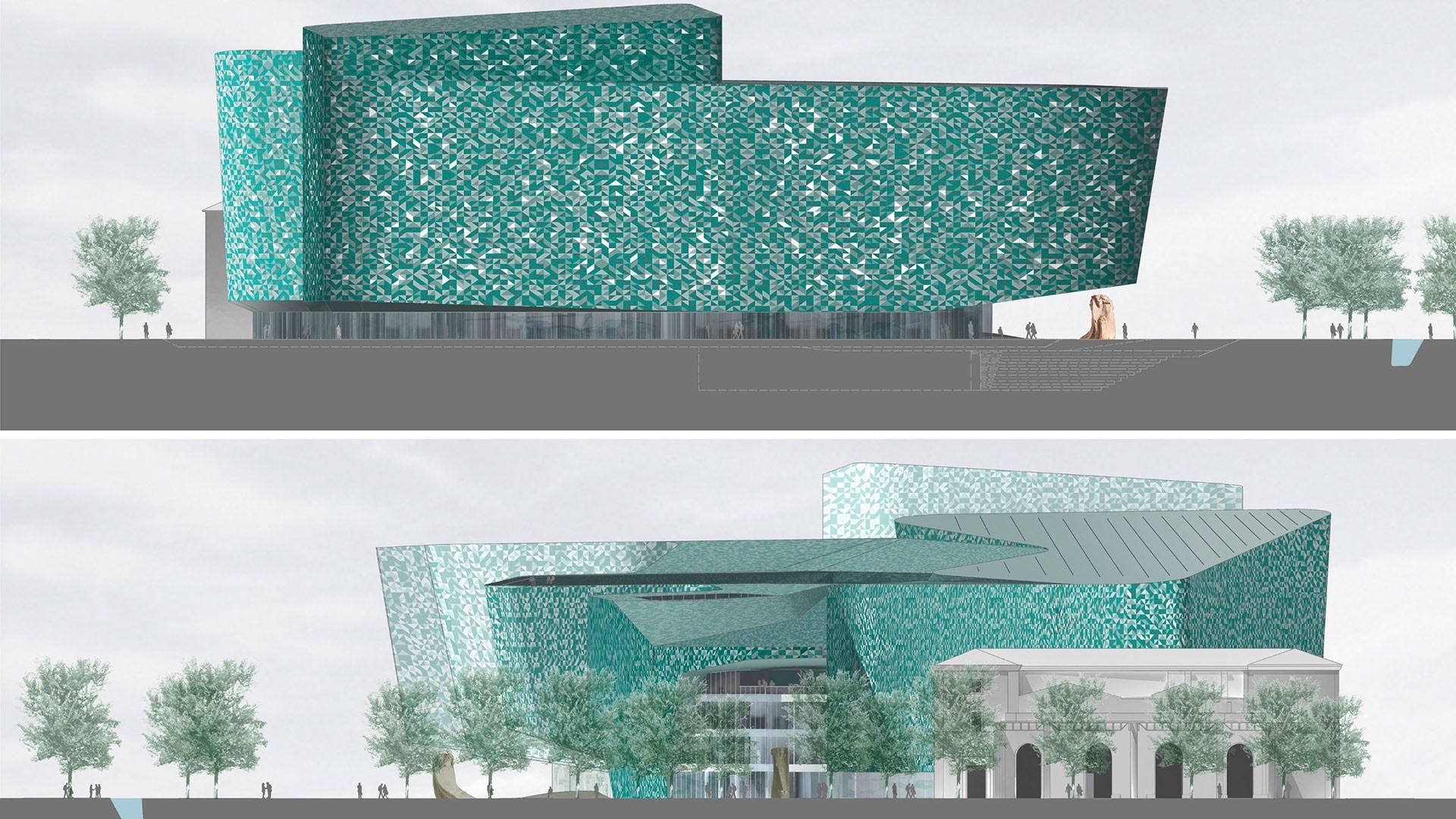 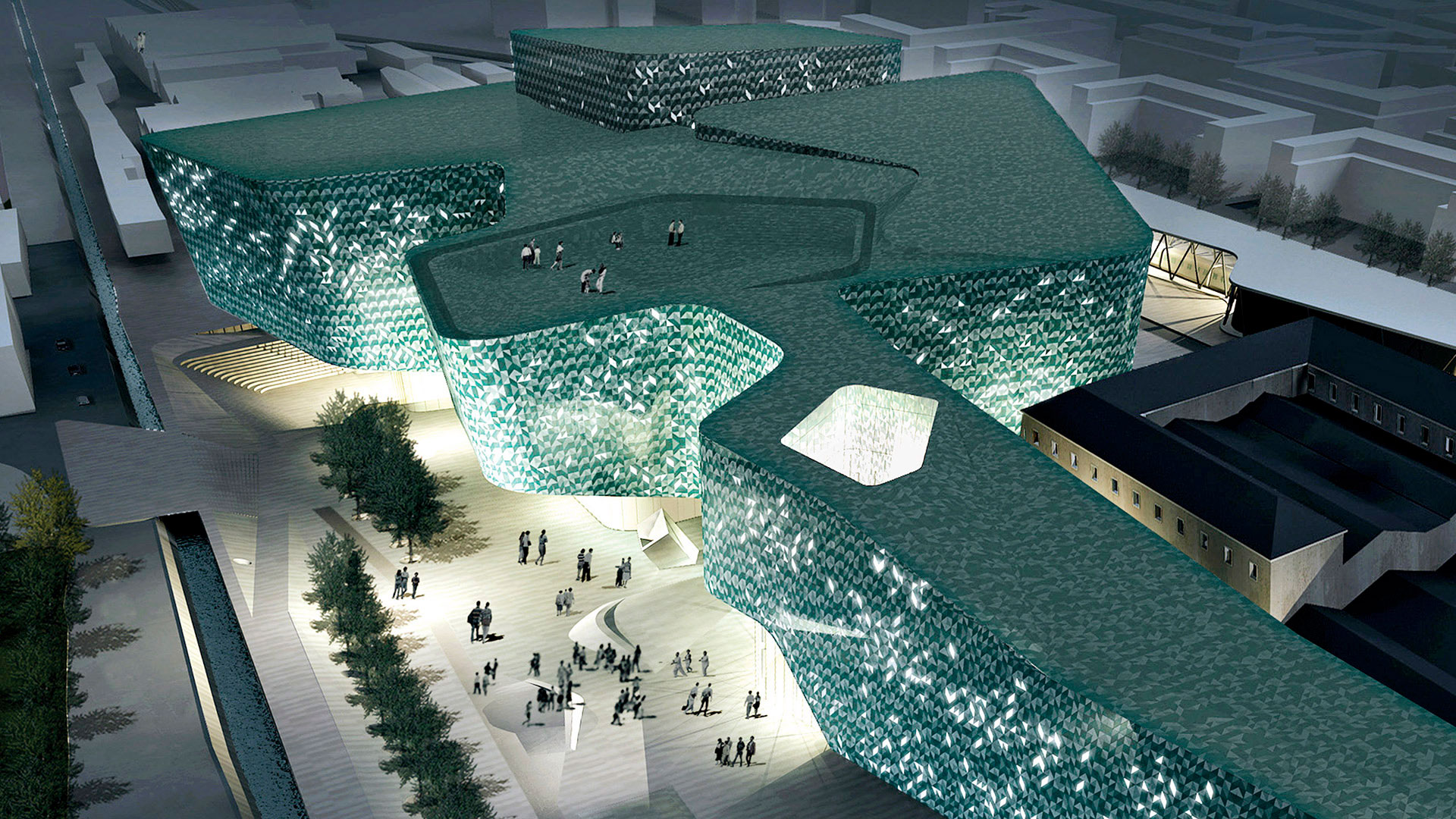 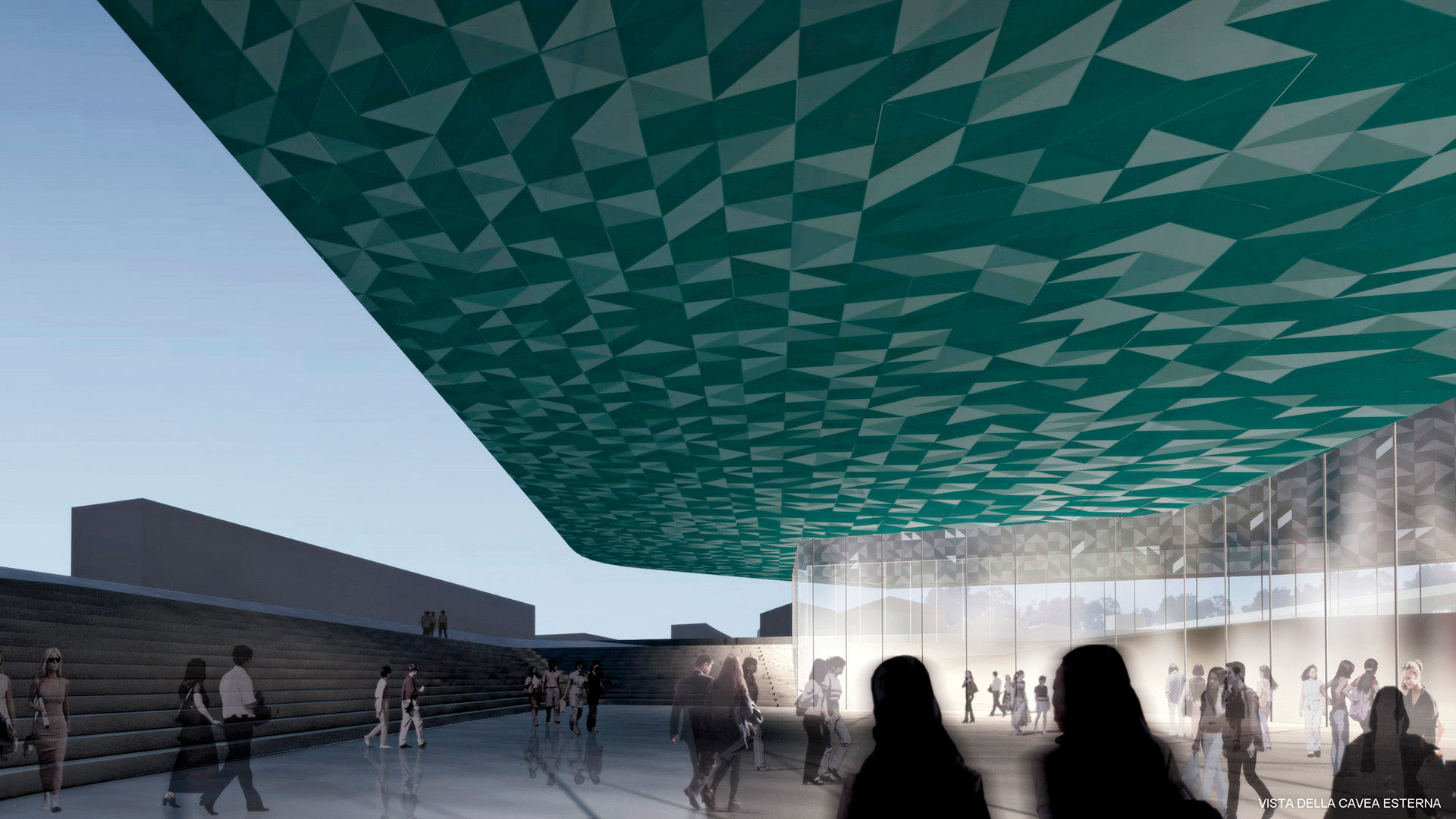 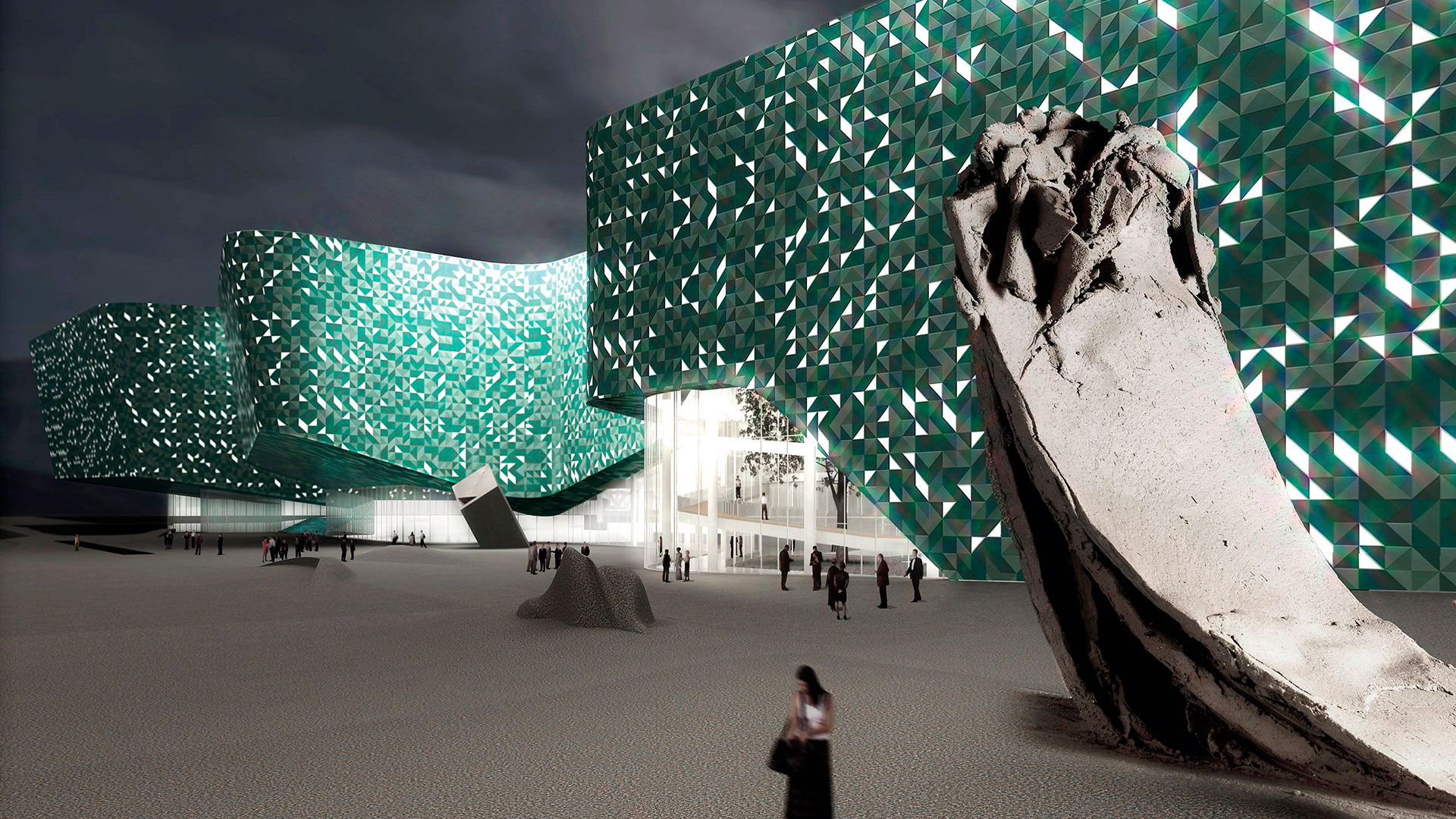 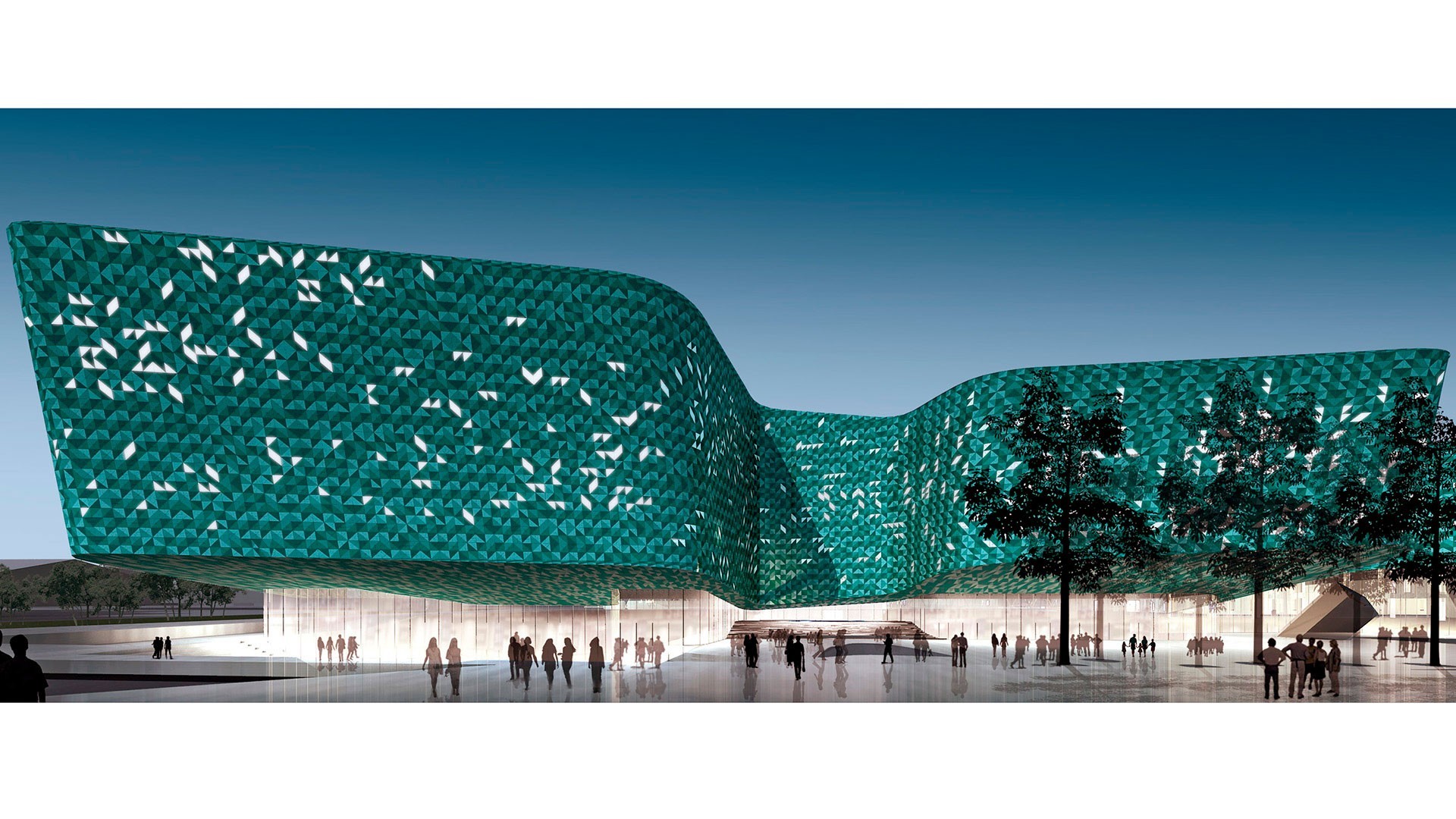 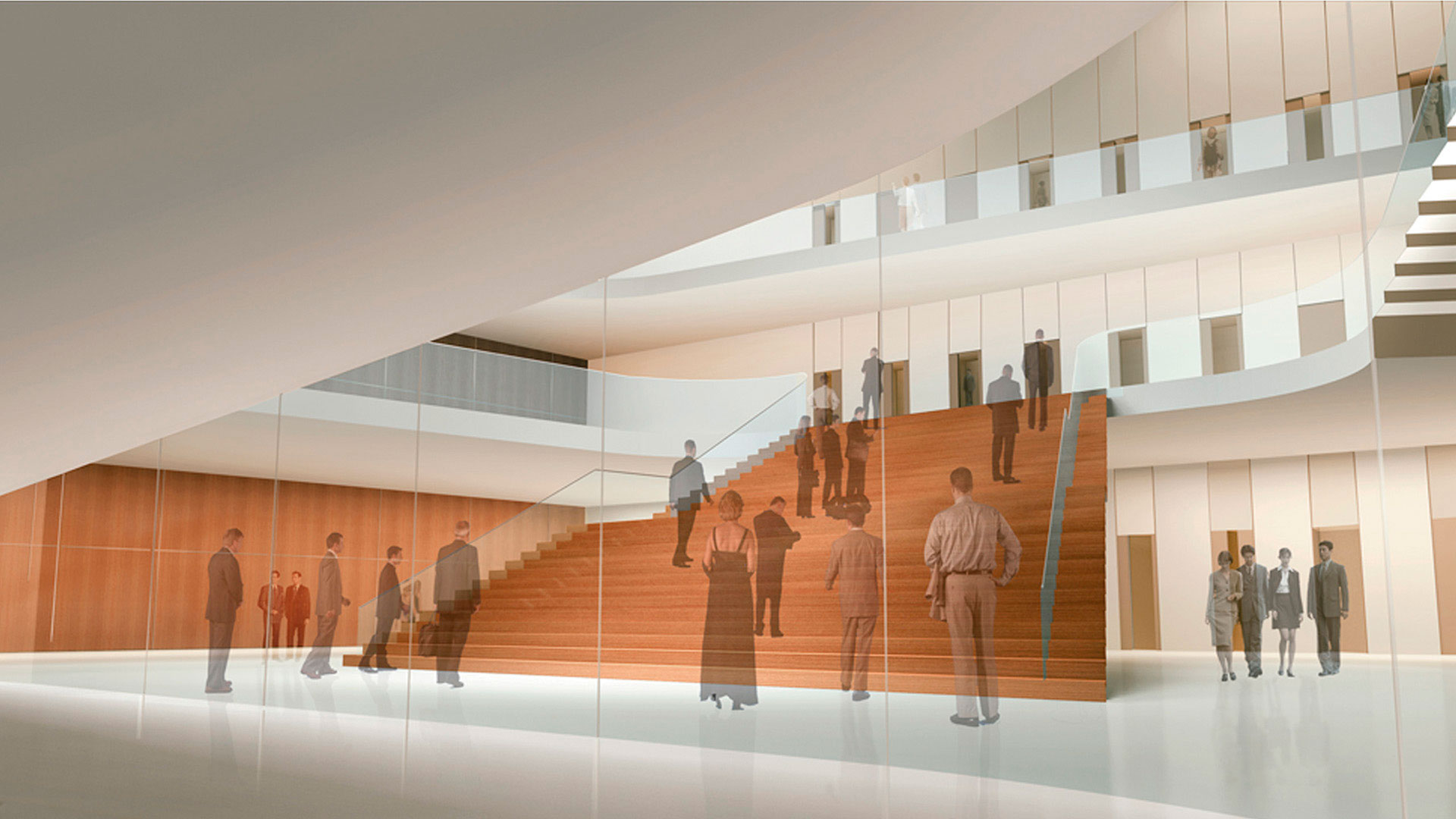 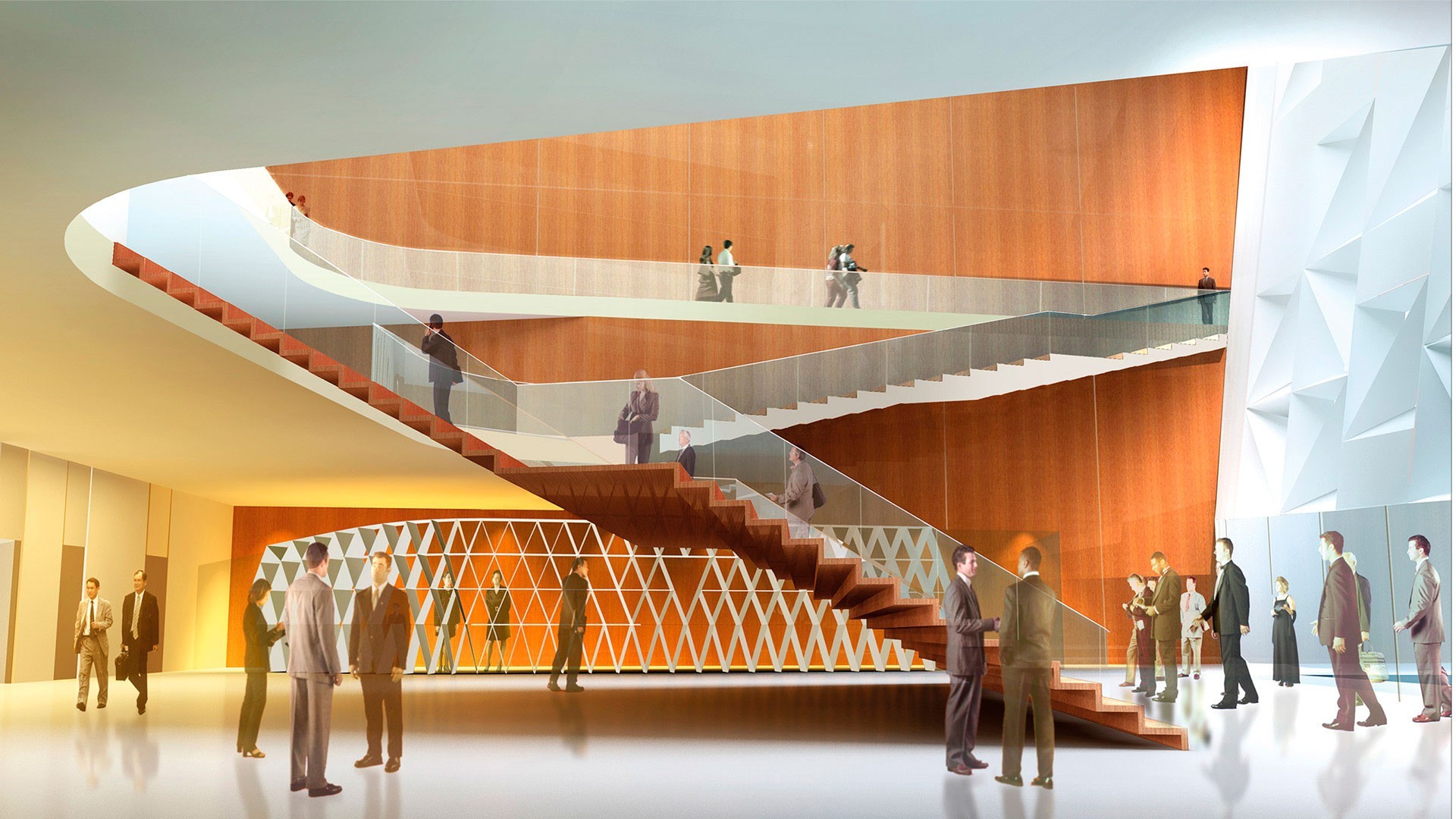 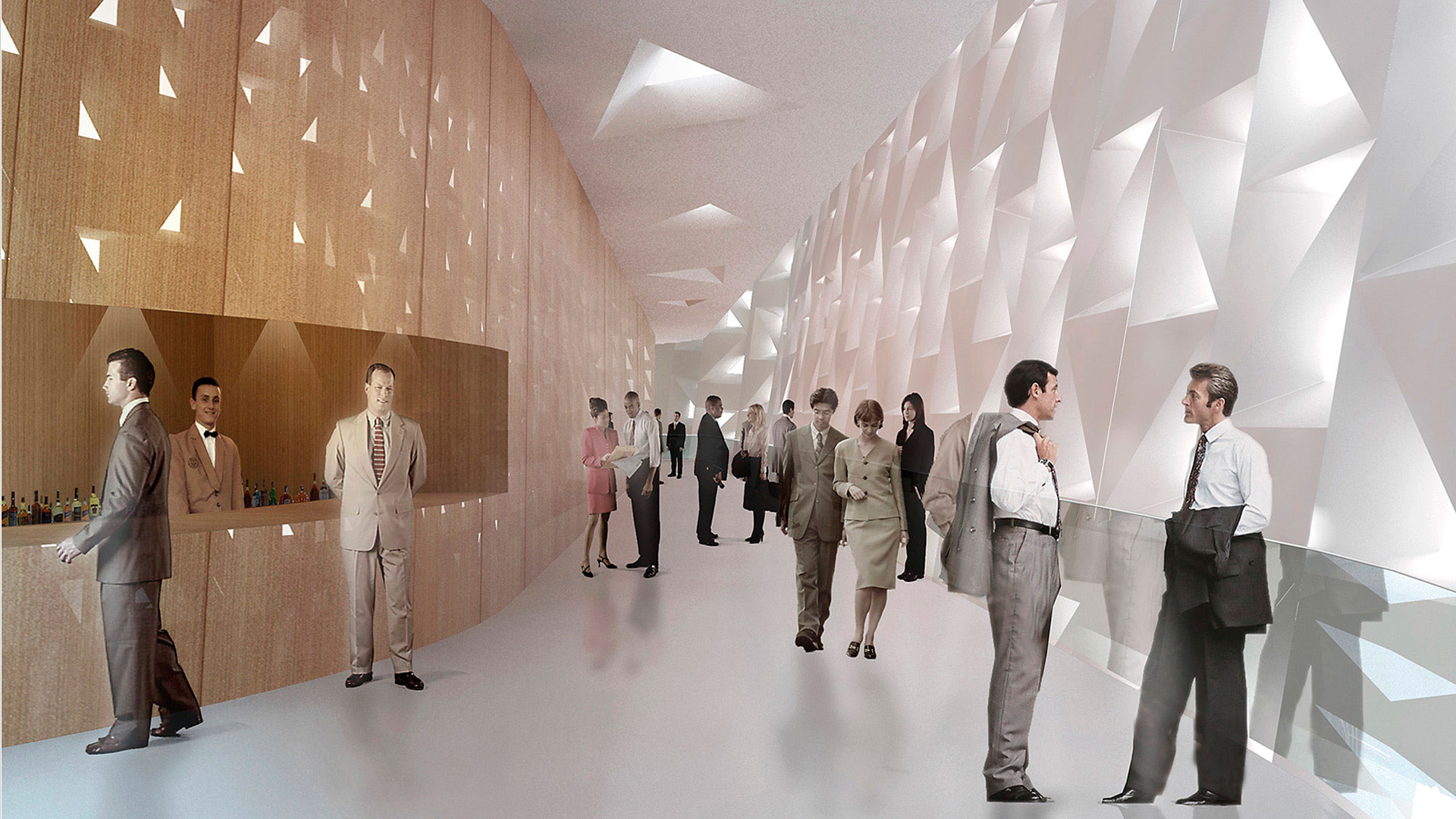 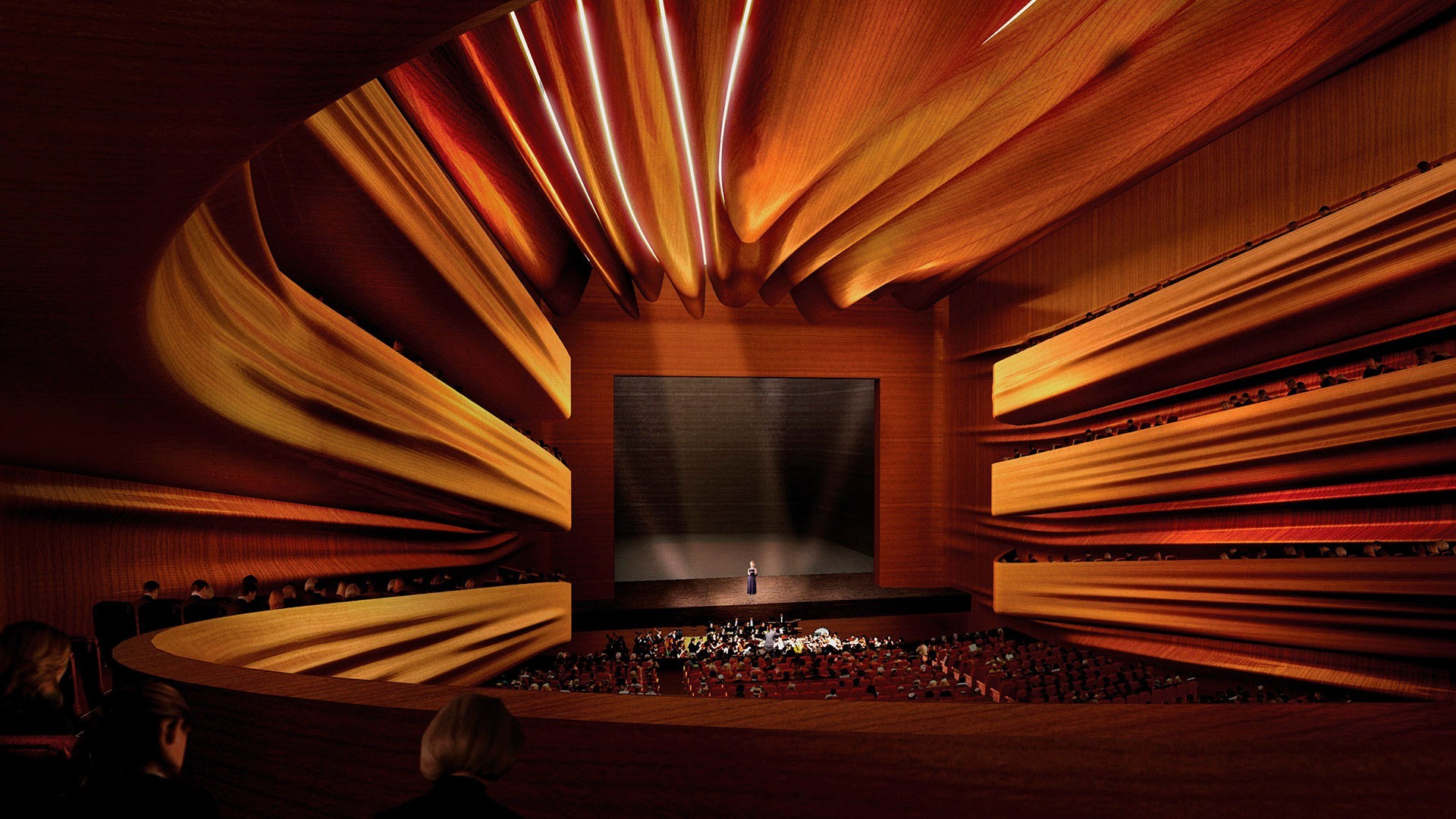