The pavilion is, as requested by the Expo, a simple rectangular container measuring 78mx28 metres, with a completely free interior, a neutral space without intermediate pillars to house the installations of the cities participating in the event, which have later been identified as Bologna, Shenzhen and Seoul. As the construction is part of the cooperation program launched by the Expo in collaboration with the Italian Ministry of the Environment, the project entrusted to Archea after a competition by invitation has transformed the hypothesis of industrial-style shell, the theme of the neutral box, into a mechanism for the diffusion of daylight; the space is therefore bathed in daylight throughout the day without requiring any energy consumption. The roof is conceived as a shed structure, furrowed, by beams whose steel structure has been covered and turned in to a succession of reflecting surfaces that diffuse the light from above.
The building has been designed in such a way as to allow the construction to be used for other purposes, and it may thus be taken apart and reassembled in another location. The entire structure has been realized in steel, with mechanical assembly methods and no use of cement; this makes it possible to recover the parts used in the construction. It is in any case a matter of a simple shell which may serve countless other purposes and house numerous activities; it may become a sports facility as a gym or house a swimming pool, an industrial shed or an exhibition and museum venue, a small covered market, or a place for leisure activities. All these uses are wholly compatible with a very simple interior surrounded by extremely light outer walls that have nevertheless been ideated and realized as very thick walls, and that vaunt outstanding insulating properties. From the interior outwards this layering comprises simple plasterboards into which a sequence of square windows in various dimensions have been cut to form an oblique arrangement.
An internal air chamber and metal panels with a polyurethane foam core for thermal and acoustic insulation are fixed onto the load-bearing columns made from simple metal profiles. A second air chamber contained in the layer between the secondary substructure and the outer skin made from aluminium frames faced with a silicon textile gives this large  box a soft and vibratile surface. The outer shell, half-way between the extroverted spatialism introduced in the Sixties and Seventies by leading representatives of Italian art and the more recent optical experiences, obligatorily declines to compete in volumetric terms with the other exhibition pavilions, to perform a role of pause or place of transition, a covered square or loggia accessible through four large doors placed on opposite sides, cut out on the surface in such a way as not to interrupt the itinerary along the Urban Best Practices area.

The structure, which was assembled in as little as 9 months, is designed so that it may be disassembled and reassembled elsewhere thanks to the dry-assembly techniques adopted, which makes it possible to recover more than 90% of the parts.
This has been feasible thanks to the layered construction: a load-bearing structure in steel; the ashlars of the reticular beams have been prepared in the factory and then connected to the columns on site during the first three months of construction; a secondary structure of steel pylons to the intermediate façade beams placed at a height of 9.3 m, this serves both as support for the outer skin and for the inner walls; a surface of drywall panels fastened internally to the secondary structure, perforated by a row of square windows of different sizes arranged obliquely with respect to the vertical; a surface of insulating panels intended for industrial constructions, fixed to the outside of the secondary structure, that forms the true thermal and hygrometric barrier of the building; Glazed frames (with double glazing to reduce thermal dispersion) have been installed in the appropriate positions; special panels have been superimposed on them to realize the openings on the façade.
The façade substructure has been fixed to the insulating panels; it consists of a trellis of uprights and crosspieces in extruded aluminium, installed at 45° and fit into brackets fixed by means of self-tapping screws directly onto the support structure.
The final layer of the façade consists of a covering of the aluminium frame formed of a fiberglass fabric kept in tension by special tightening cables inserted in the extruded tubular elements forming the frame. Special pieces have been realized for the corners and for the 4 highest points of the building, as well as for the windows of various dimensions and forms on the façade: squares, triangles, trapeziums and lozenges.
The material, chosen on the basis of the necessary characteristics of eco-compatibility, consists of a silicon-coated fiberglass membrane that is highly resistant to traction, translucent and durable. About 810 panels, covering a total surface of 3070 m2, have been used.
The panels have been produced and pre-assembled in Italy by Tensoforma Trading S.r.l. by means of a special assembly technique that makes it possible to control the pre-tension of the membrane and the consequent equilibrium of the panel system, and have then been transported by sea to Shanghai and assembled on site. A series of RGB LED apparatuses (able to change colour on the basis of programmed scenic designs) are installed along the perimeter of the shell, and embedded in the floor of the outdoor square in such a way as to underscore every diagonal crossing of the structural web of the façade. 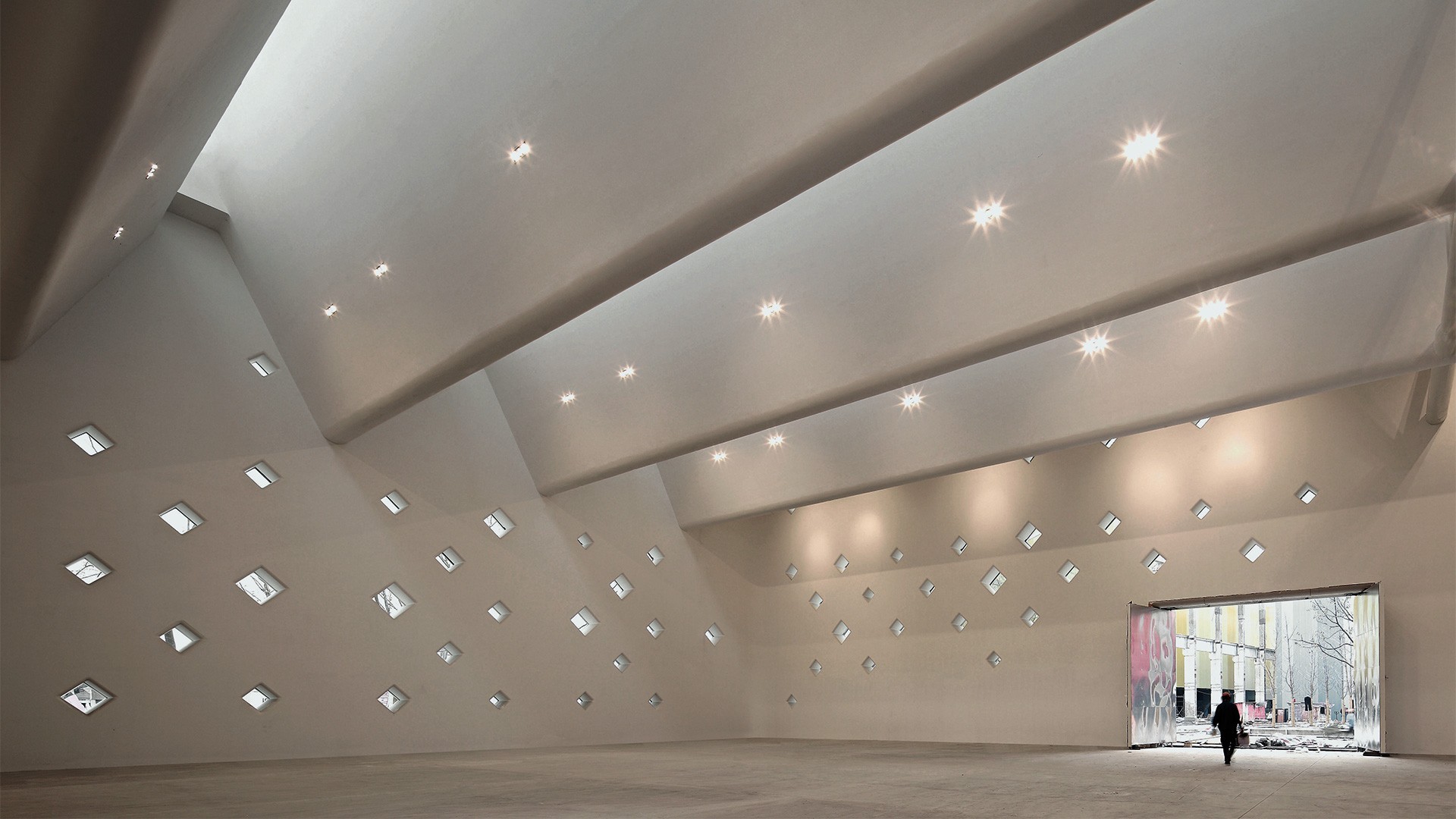 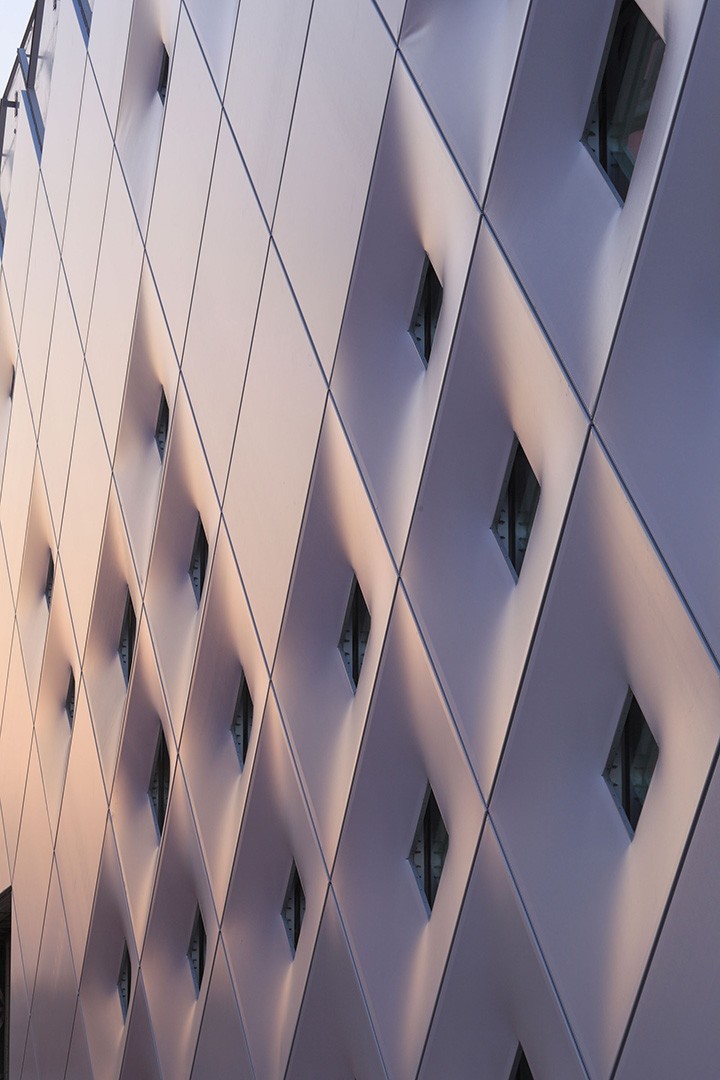 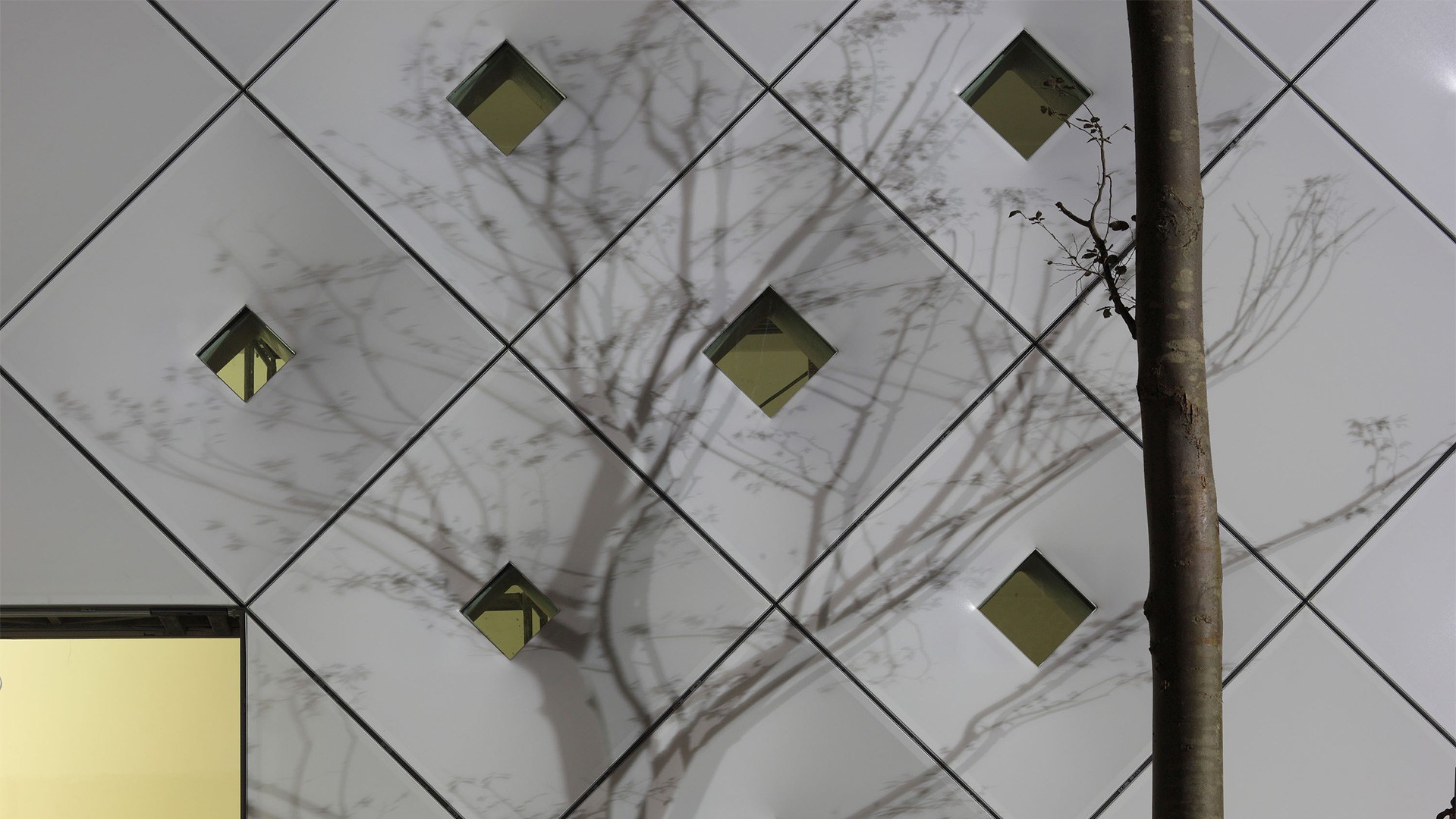 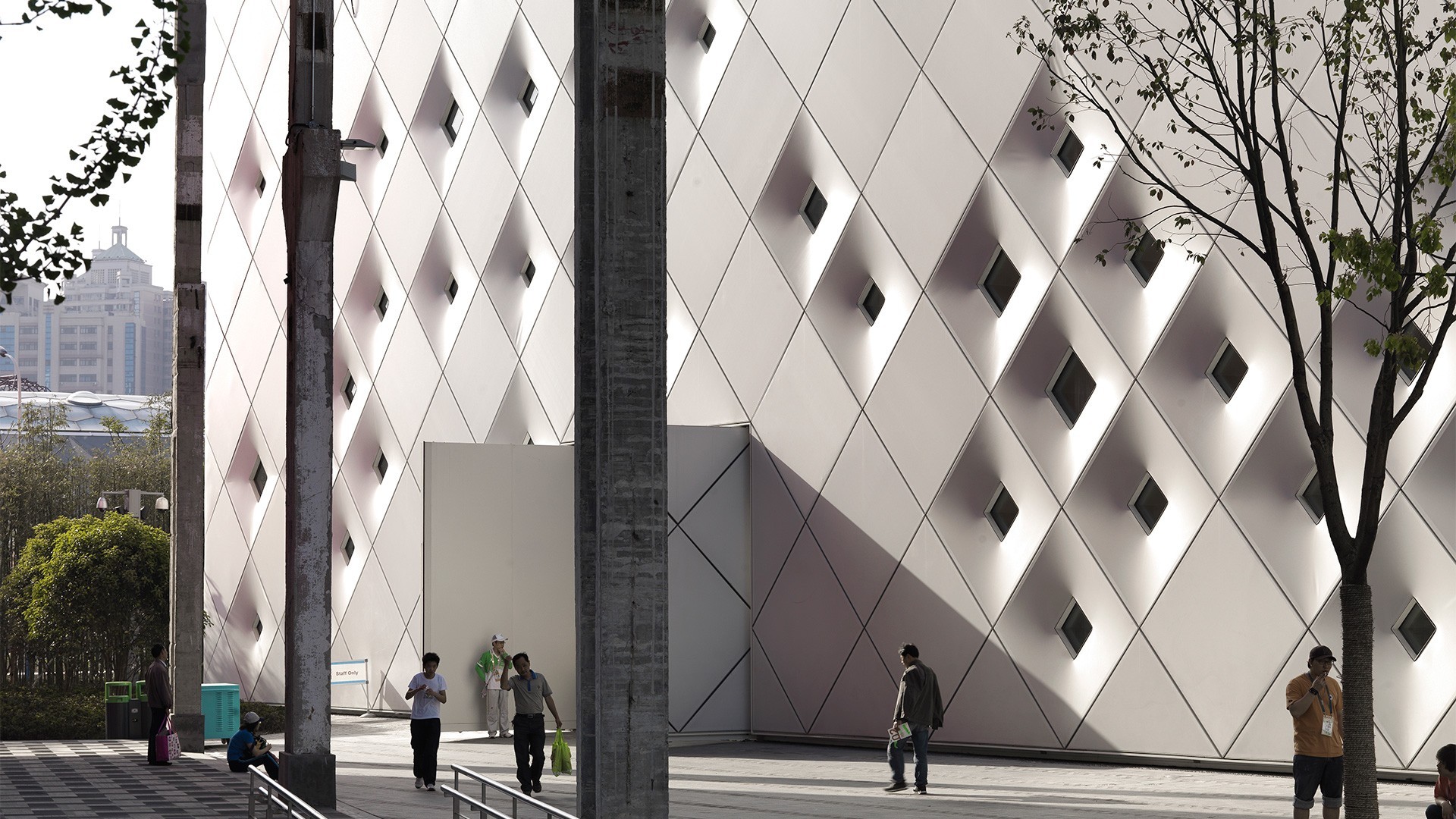 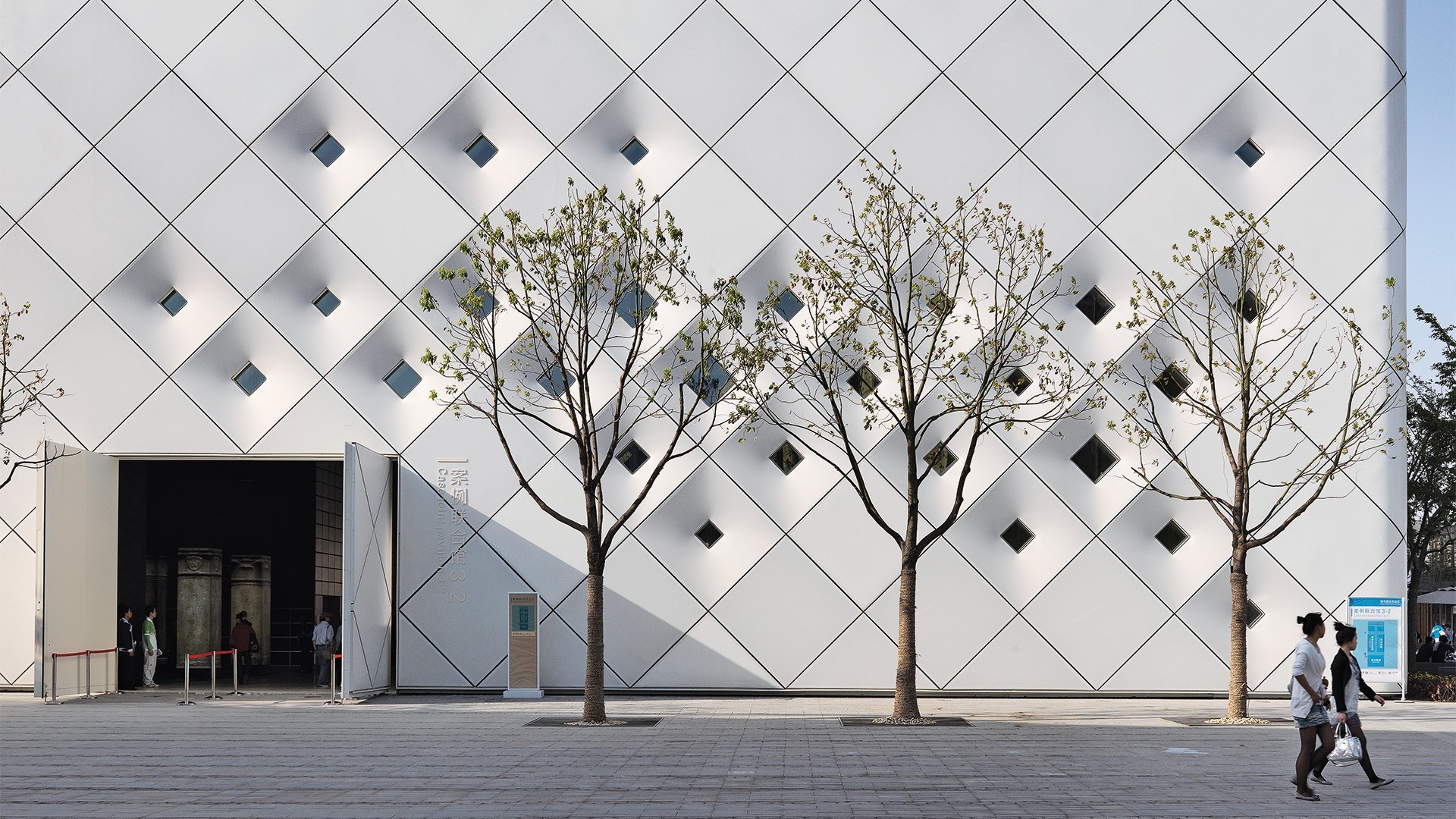 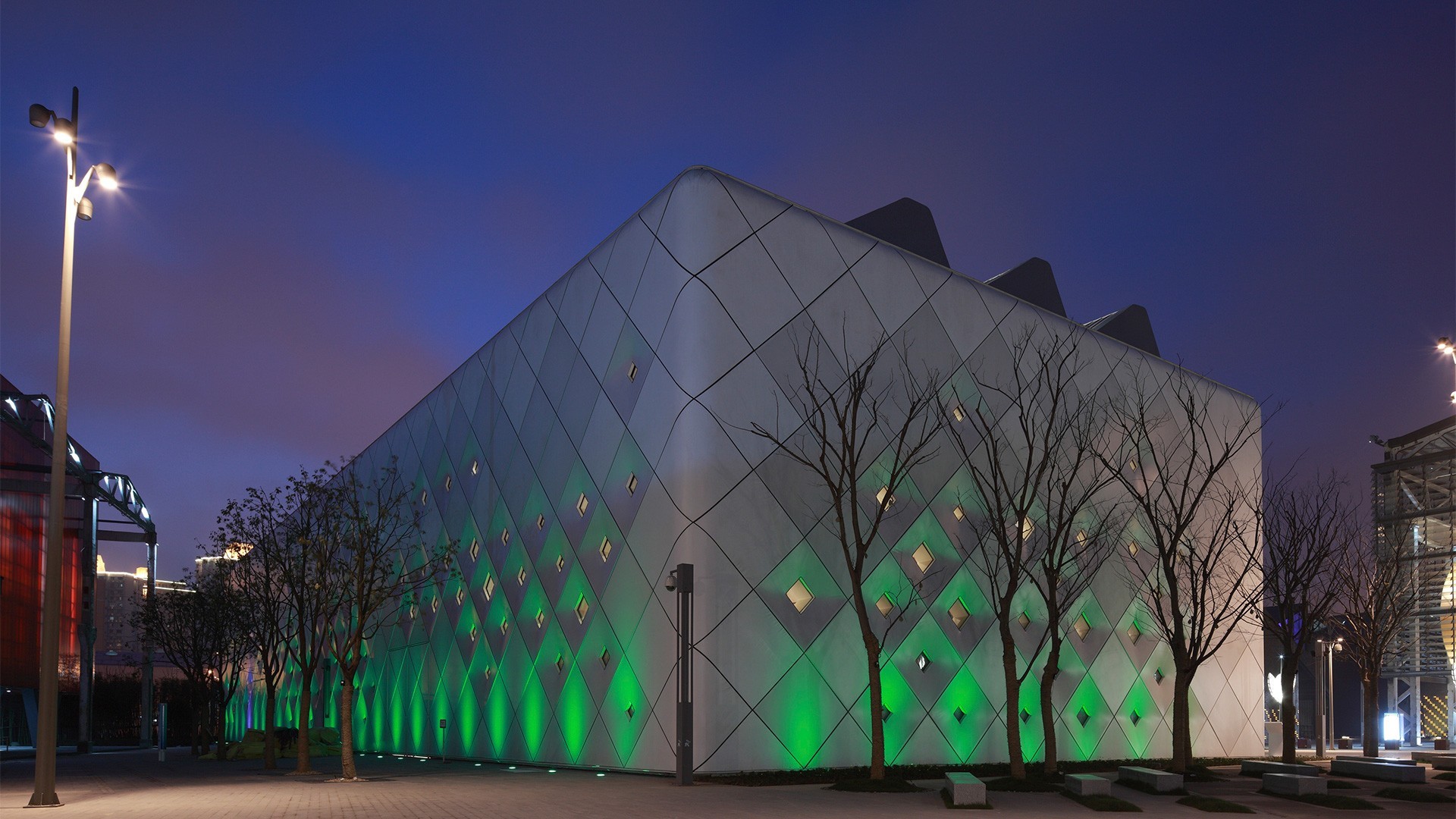 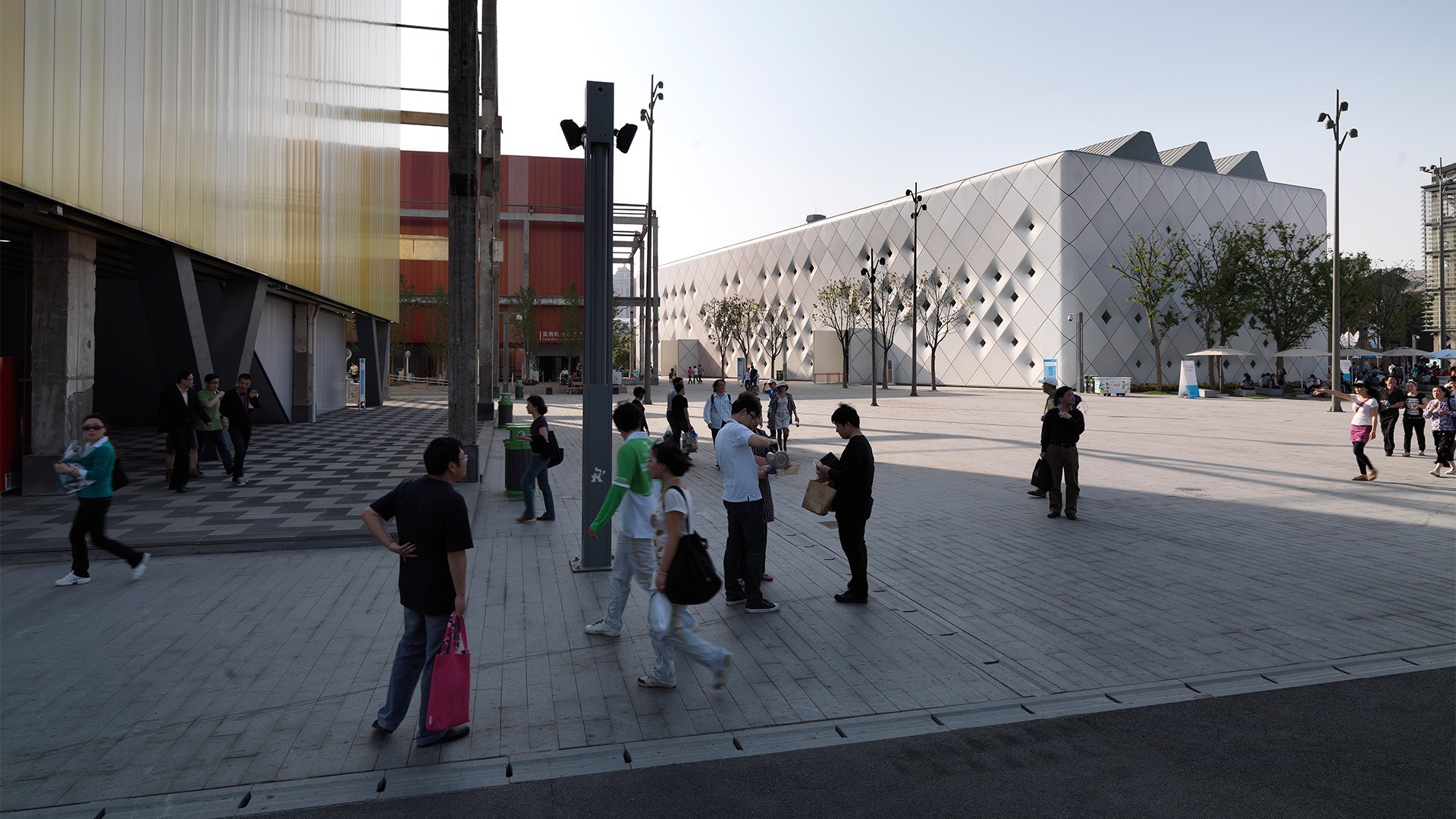 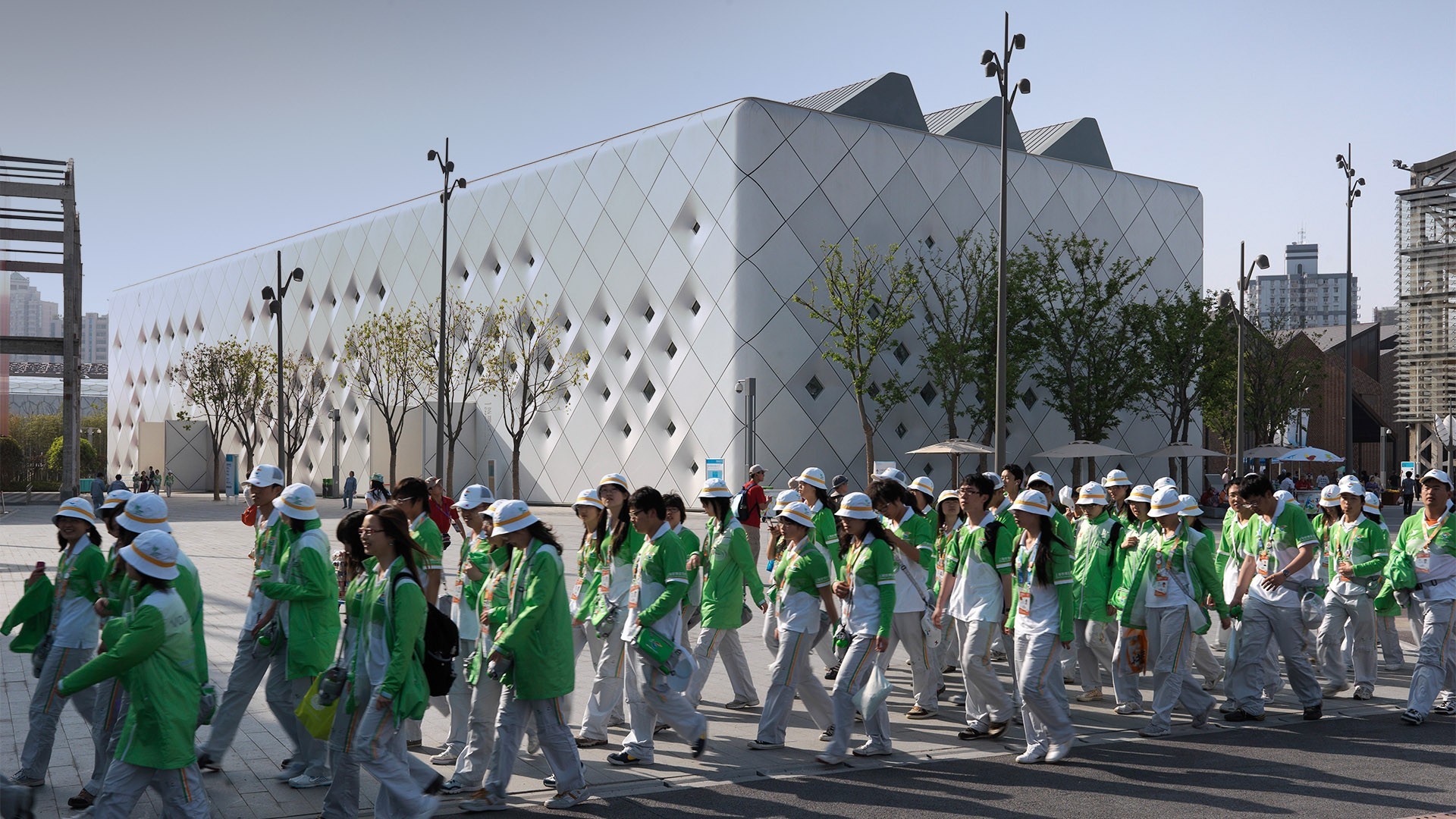 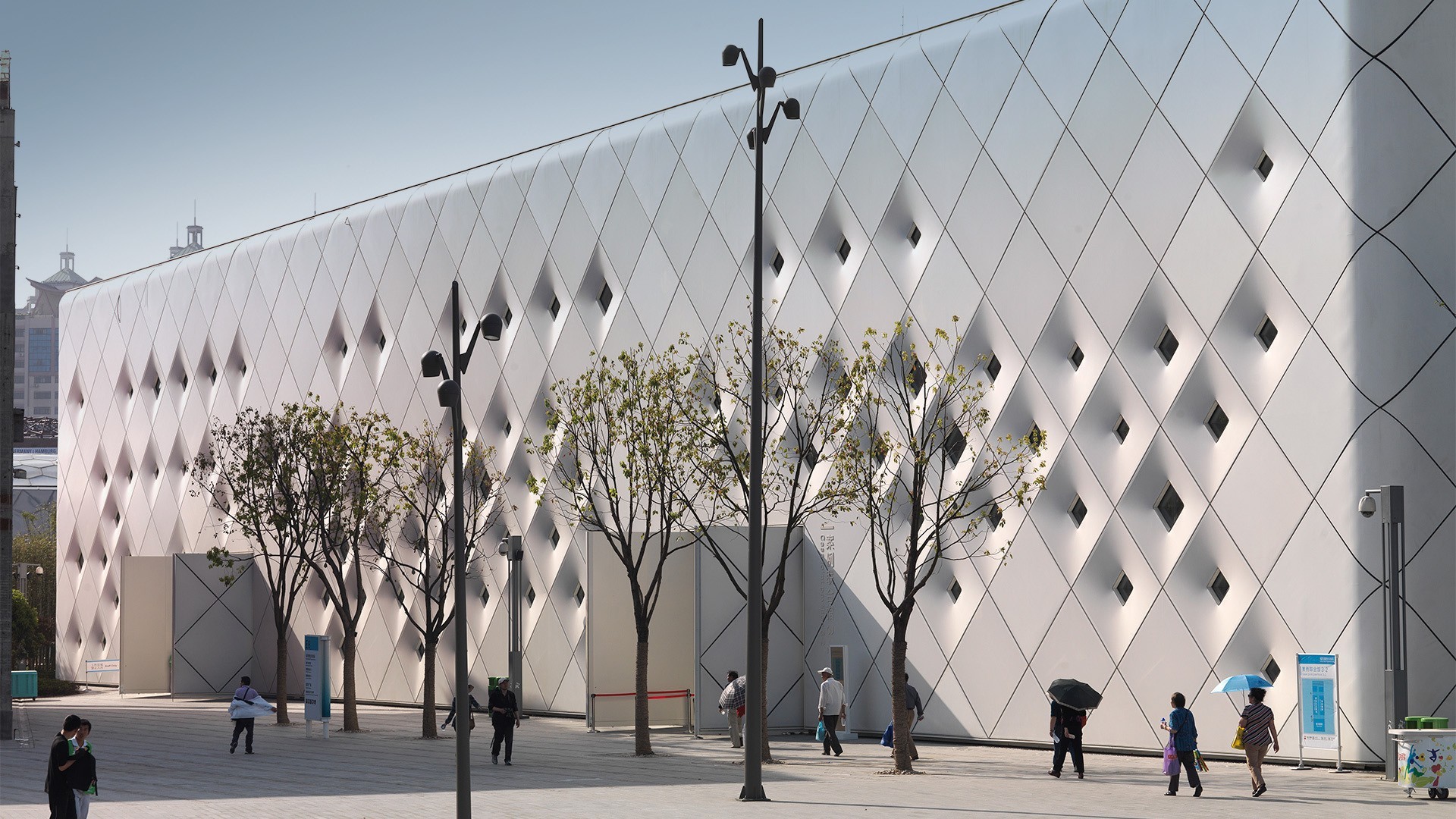