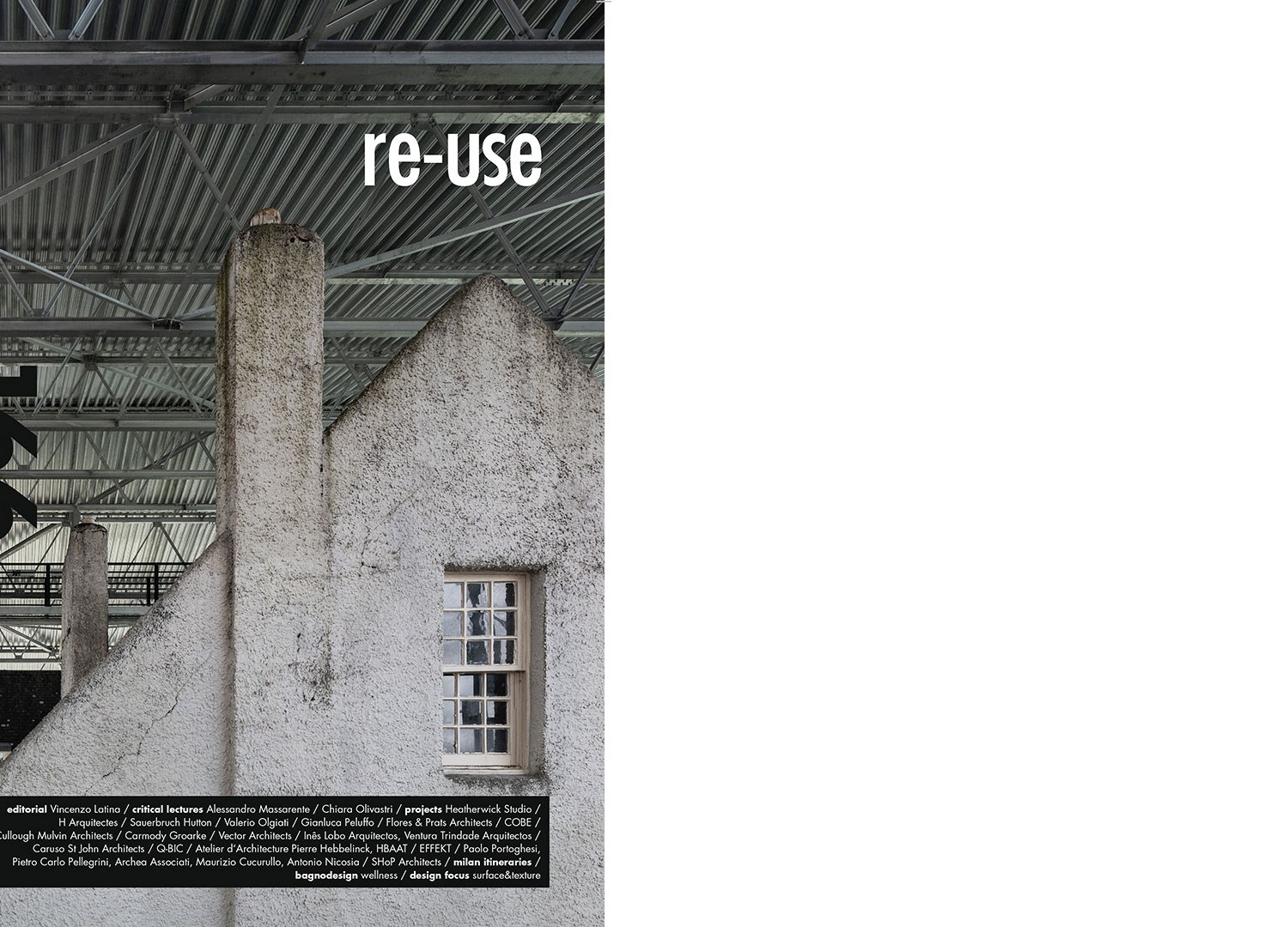 It is always useful to study the etymology and meaning of the words we use so that the custom of the language can also find, in the simple re-reading of the dictionary, the verification of terms that we pronounce daily in the exercise of the profession of architect. Many of these, for example “Reuse“, are the result of a literary design activity since they stem from the “composition“ of terms or words, in this specific case from the suffix re – “again“ and the verb “to use“, capable of revealing a behaviour or an activity, specifically: new, further use; recovery, reuse. Recover, rebuild, recycle, readjust, disassemble and reassemble are common architectural practices linked to a profound and popular intelligence – especially in Italy – an ancient knowledge that escapes the logic of pure consumption by introducing into the project, and therefore into the city, the theme of duration, duration, transformation, regeneration, and respect for available resources. Topics once brought to light by the lack of available resources and today necessary, on the contrary, due to the overabundance of means and tools, consume the environment, the soil, the air and the climate with frightening rapidity. Paradoxically, we are forced to become aware of the fact that it is not only poverty and the lack of available means that we have to deal with, but in particular of that behavioural bulimia resulting from the disproportionate availability of oil and its infinite and damaging derivatives, of the excessive quantity of waste, and, in our specific field, from an ability to build unprecedented in history. Fortunately, the debate and awareness on the subject are longstanding issues, as shown by many urban political choices that in the most developed areas of the planet discourage or even prohibit new buildings in favour of the recovery of the existing building heritage, urban regeneration, functional transformation, even the “introspective growth“ that has its fulcrum in the “zero volume“ master plans, in other words, incompatible with further expansive theories. In the past, as recalled by Alessandro Massarente in his essay published in the pages to come, there are interesting analogies and convincing experiments of Re-use, disassembly and reassembly of parts of buildings in other buildings following interventions, almost always motivated by lack of funding. Today, however, this practice is indispensable since the scarce resource is not of an economical nature, but nature itself understood as environmental balance and availability of land. Building onto pre-existing constructions is therefore a necessity beyond a trend that introduces the theme of ethics in urban planning and in the construction sector, an operating condition that consequently influences the debate and reflections on the architectural project as a discipline, which at this point must consider as a starting point not only the land, but pre-existing elements, an art that has already, according to Morris, embraced all the modifications of the earth‘s crust except the pure desert and that now must measure up to what has already been modified and built over the centuries. It is quite clear that intervening on existing elements involves a careful interpretation of the urban facts (to cite Aldo Rossi) and of the context, but to which we must add the attentive evaluation of the original artifact to be modified. In other words, it is a matter of changing the regulatory boundaries and understanding that recovery and project restoration have become synonyms and absolutely overlapping fields. For years, the magazine has strived to promote research and studies in this direction ever since June 1997 (Area 32) with the first monographic issue. Today our distinctive trait is dedicated to the theme of restoration or better, the relationship, in architecture, between the new and the existing. Since then, I recall from our bibliography, the issue on the reuse of ancient elements (Area 45), the in-depth studies on the addition and transformation of historic and modern buildings (Area 148) up to the interesting interventions on marginal, or interstitial areas of increasingly complex post-industrial cities to control and administrate. The modifications (Area 91) of the building heritage also involve a serious political and legislative programme both at national and local levels, aimed at safeguarding the territory and recovering and transforming existing buildings, whether they are industrial or residential. This insistence towards a cultural and therefore editorial direction of the magazine, confirms the awareness that a decisive action of an improvement of the building heritage can offer substantial advantages: reduction, first and foremost, of land consumption, reduction of costs for infrastructures and mobility, densification of urban contexts, such as improvements in the quality of life and less environmental pollution. Fortunately, the majority of protagonists of the architectural debate and of public or private institutions are moving in this direction, as shown by the success of the Grand Parc Bordeaux project by the French firm Lacaton & Vassal at the Mies van der Rohe Award 2019. This is an interesting intervention for the redevelopment of housing on a popular building constructed in the Sixties where the element added to the façade has the function of both implementing the surface of the single units and decreasing the thermal dispersion of the building. It is not a new building, it is not a coincidence, but a precise choice that we feel we can support and encourage.