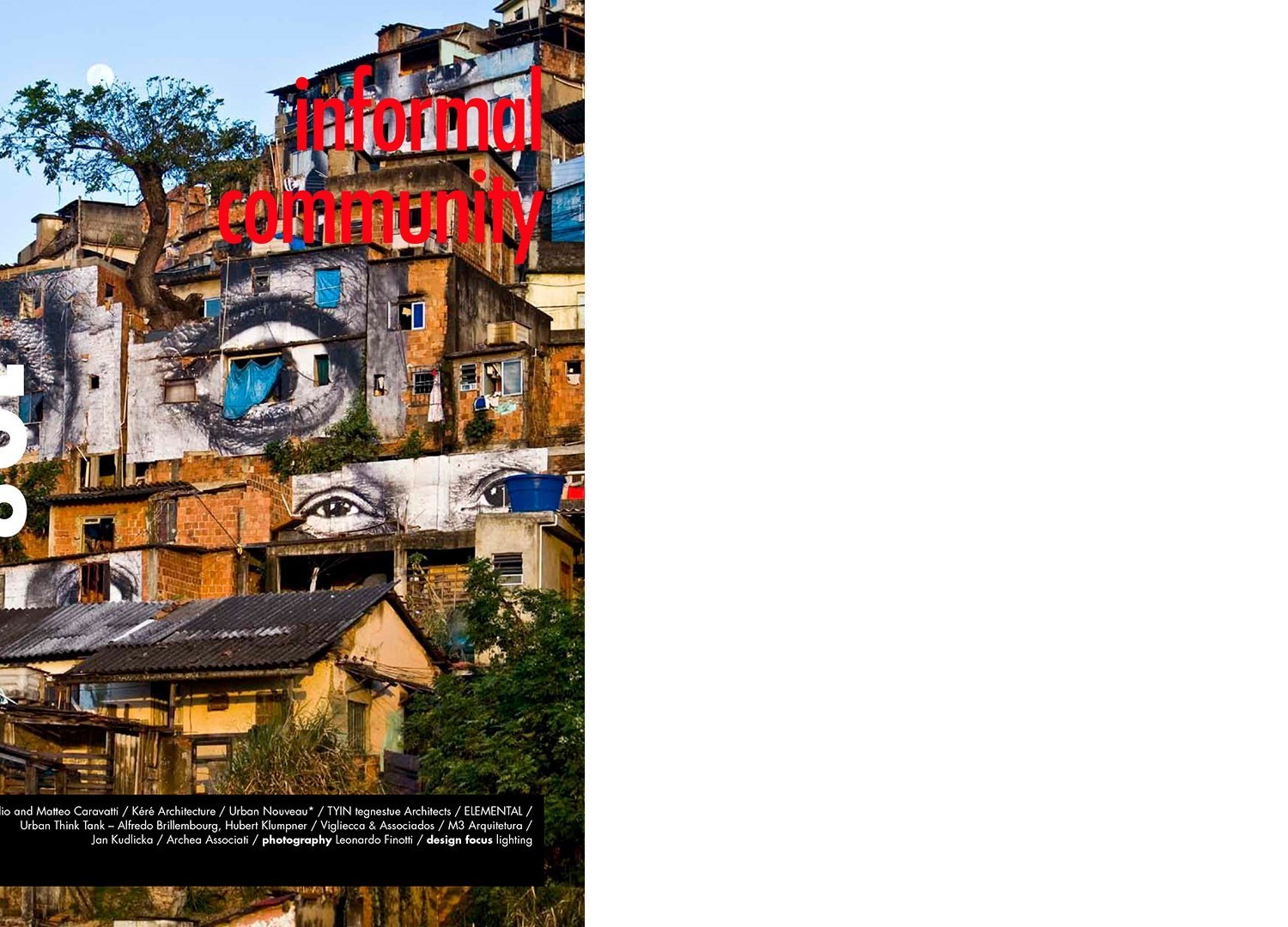 Informal community
If images of slums, informal and spontaneous communities, favelas or whatever we want to call urban areas of povertà and hardship dominated the first room of the Corderie dell’Arsenale at the last Venice Biennial  titled Common Ground realized by Sir Norman Foster, then the phenomenon has become so great and important that even the most sophisticated of architects, still committed to designing technologically advanced bank headquarters, opulent skyscrapers and airports, has felt a change of climate that makes the architectonic culture see the existing reality in a new light. In fact, even if it is a matter of an exception linked to the theme of the exhibition, the question of communities, of a way to live without heeding market mechanisms, selfregulated and motivated by the need to survive, occupies quantitatively very large spaces in some areas of the planet, from South America to Africa, from India to China, and much of the continent of South-Eastern Asia. And the wealthy United States are not exempt from this phenomenon of grey anti-urban areas, as one may easily ascertain if one ventures beyond thesparkling neon lights of Las Vegas and into the outer suburbs where the workers (waiters, cooks, servants etc.) of the city of money and deceit live in mobile homes, campers and prefabricated and improvised small houses. It is in any case obvious that the issue is exploding in metropolises as Mexico City, Caracas, San Paolo or Rio de Janeiro where the spontaneous communities are greater in terms of surface and inhabitants than the formal or legal city; a situation in which the Western concept or image of ghetto is completely overturned and the compounds of the middle and upper classes, who seek to isolate themselves and keep apart from the rest of the city, are transformed into limited and closed communities.
The case of Hong Kong is incredible: due to the lack of space, makeshift dwellings have been built on the roofs of the skyscrapers, inhabited by communities of marginalized people who are unable to afford a normal home. In other words, the problem may be global but the solution or attempt to resolve the condition of inhabitability suffered by millions of people cannot take the form of a unitary strategy that fails to consider the climatic, socio-political and dimensional conditions of the phenomenon. It is certain that when a problem has become so extensive as to appear unresolvable, no quick-fix systems based on demolition and reconstruction will work, as this would inevitably also mean deportation. What is needed is researches and solutions capable of improving the urban structures that these spontaneous communities have succeeded in generating, resolving the critical problems caused by a lack of utilities and insufficient hygienic conditions without altering the positives aspects which, if we look closely, are an essential part of the very genesis of spontaneous communities, as the lack of streets, thoroughfares and parking spaces, due to which one may focus on alternative mobility systems in many favelas, as the funiculars built in Caracas or the lifts in the favelas of Rio de Janeiro.