The kitchen was historically conceived and experienced as a place for making food with a work surface, a fireplace or stove for the fire, a stone or ceramic sink for washing food and dishes, and a pantry and cupboards for keeping pans, plus at least one shelf to have everything in easy reach. It was simply a room, but intensely so, a space designed and built for food-related doings. Everything was on display, and you could touch, move, grab, put back and use it all. With avant-garde movements, especially the Frankfurt school, starting in the 1920s, the kitchen became a component of an “existenzminimum” that turned the home’s primary room into something that was economical, minimal, modular, a machine in a standard box, usually wood, that dissolved the kitchen’s domesticity as a room, and sadly as knowledge and tastes too. Kitchen manufacturers quickly adapted to the new market demands, positioning themselves as sophisticated furniture makers, builders of cabinets and shelves, without any expertise in the area of food and preparing it, preparing meat, pasta and vegetables, though these are the only activities that should give shape to this most important space in the home. Every brand put out an infinite array of modular cabinets, always the same, more and more complicated, with technologically advanced doors and hinges, as if making a good meal depended on drawers opening and closing silently, equipped with silencing or braking devices. Aluminum, metal, mind-boggling lacquers, everything ultra designed and falsely innovative, while the place for preparing food was stuck between cupboards and cabinets, always designed as an empty space, a lack of designing, the work surface. In La Cucina, this place is instead the heart of a design that is a simple as it is truly innovative. In fact, until now, kitchen counters were always chosen without any concern to tailoring them to the needs of preparing food, indifferent to the work of cooks no matter how modest  who still need marble for fish, wood for cutting meat, rough or smooth surfaces, maybe soft and rounded, so the work surfaces can be easily cleaned. Maybe this happened because “furniture makers” put out kitchens that were increasingly hidden and boring, more like living rooms, light years from the world of food that no one thought about because they seemed to think that kitchens weren’t actually for making things to eat! That’s right! Making things to eat was excommunicated and reduced to a mere option for a space that was  quite wrongly  considered just a mere status symbol for the house. La Cucina, produced by Antonio Lupi, designed and conceived by Archea / Marco Casamonti, brings the space for preparing food back to the starring role related to food, using a simple, yet groundbreaking inversion and conceptual invention. The design for the place for cooking is a work surface that is the priority rather than cabinets to hide the tools of cooking, as has sadly been the case until now. A single shelf is made of an extrusion in a “C form” that mimics the gesture of a hand taking and handling the ingredients of each dish or holds the cooking tools. A lighted line is built into the underside of an inclusive space, feeling almost maternal, to properly light the work place. The elegant continuity of the Corian (R) surface a material that can be shaped without bothersome joints  means the entire work area can be cleaned with perfect ease. The wall mounting frees the floor from the encumbrance of the traditional base, which lets it be placed at user height, respecting their lifestyles and needs. The upper shelf holds a suction hood and the lighting system, as described. The lower part, created in a continuous material, holds sinks completely built into the work surface, the induction plates  contemporary flame-less burners  as well as the space for cutting and all the accessories the cook might want. Tap mixers and openings are on the vertical surface, built-in brushed stainless steel, from the Ayati collection. Any accessory or tool useful for making something to eat can be inserted or housed in the “infinite table,” freely sized, without set modules or measurements, that is La Cucina. The kitchen is made to measure without compositional limitations or having to match modules. It is designed in two versions: one wall-mounted one and one island version, the two-faced La Cucina. Even with its many innovations, La Cucina does not abandon tradition. In fact, it returns the work surface to the dominant role, as it once was, while cupboards and cabinets can be built into it in the familiar, classic sense. Finally, a new Renaissance for the kitchen: the perfect marriage between classic and modern. 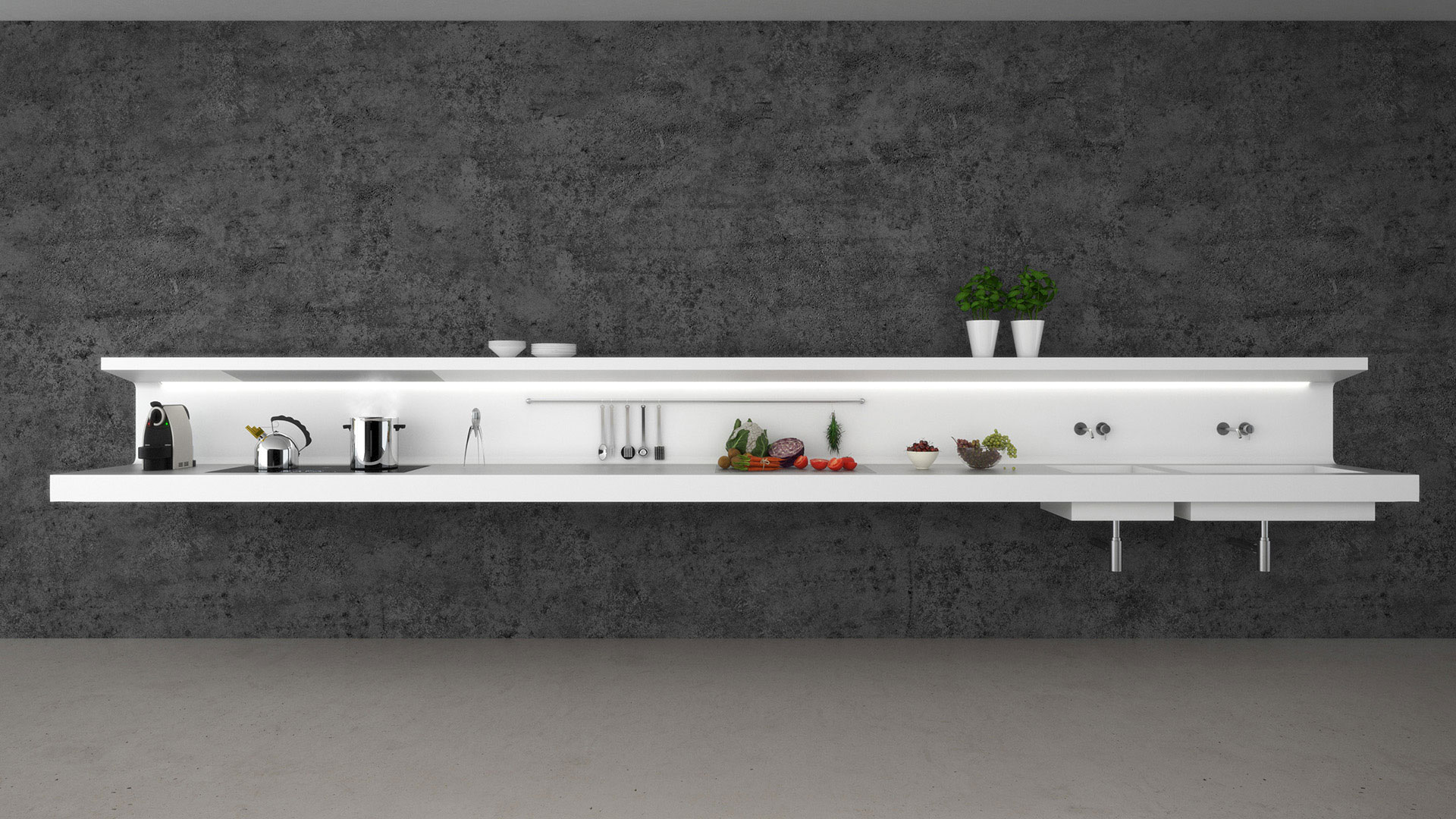 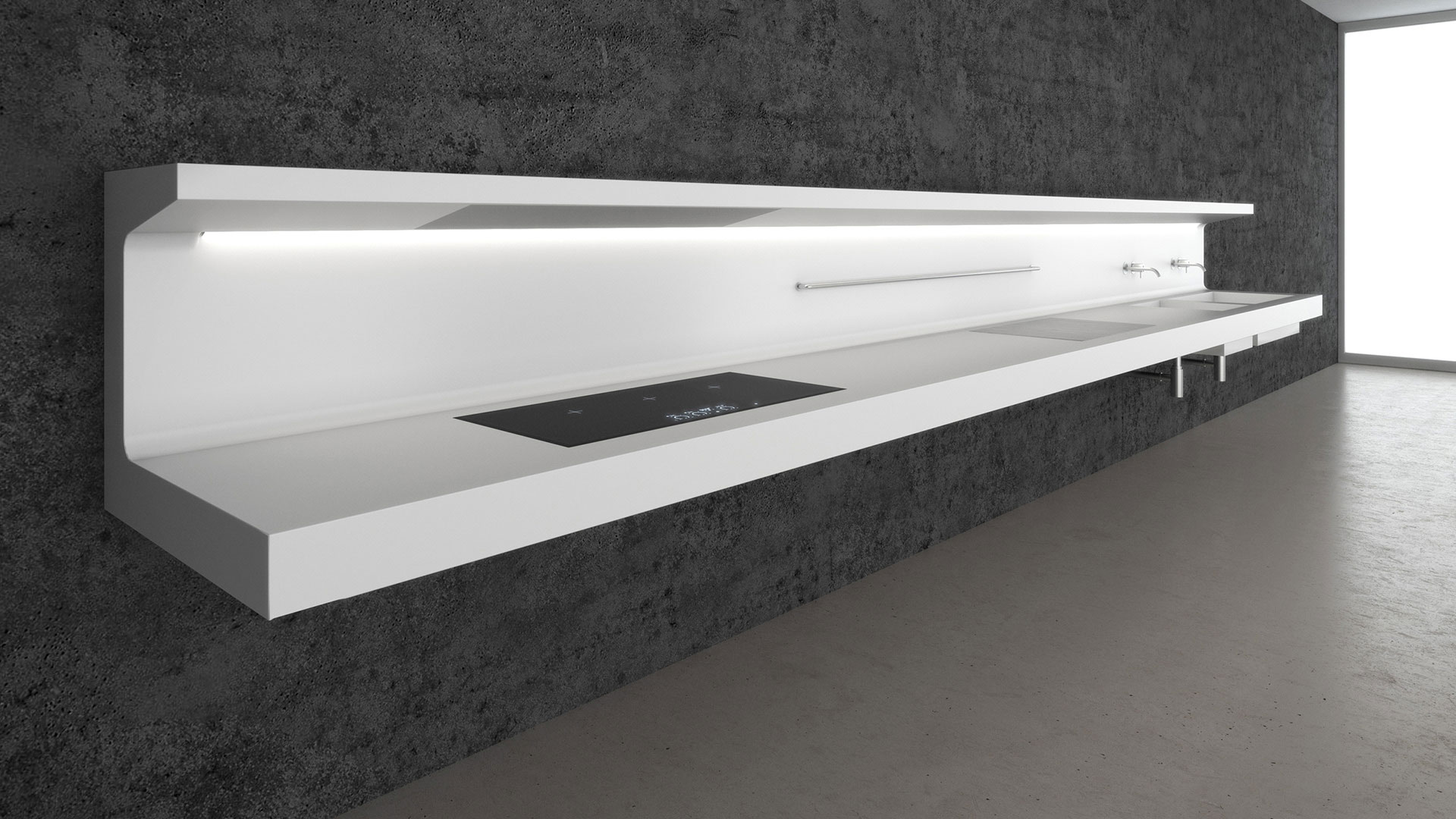 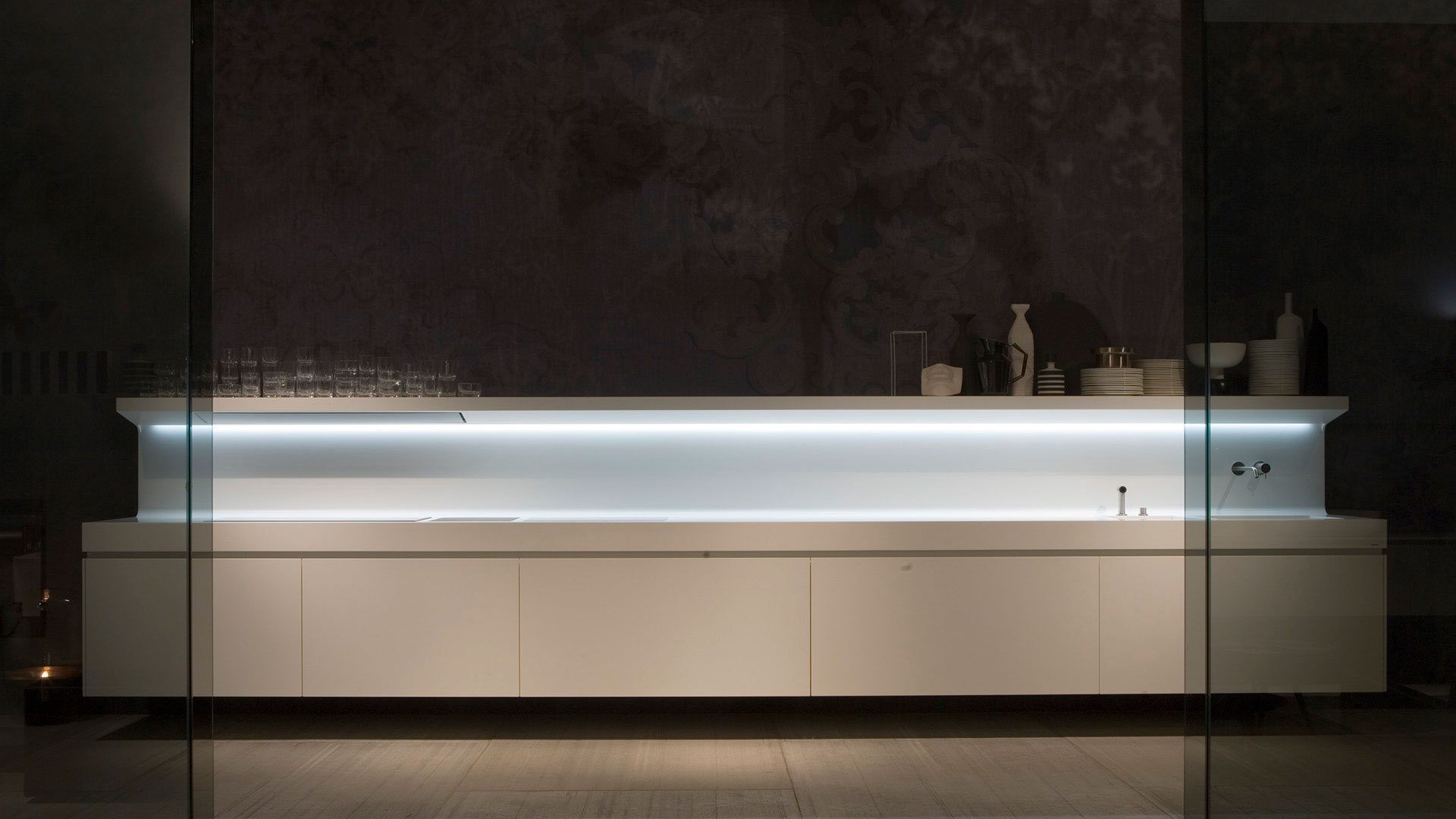